Manchester Climate Change Conference - a time to be Greater 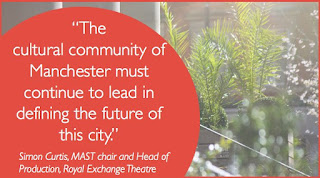 As if we really needed reminding, our political culture is shifting in Greater Manchester. As I walked from work to the Manchester Climate Change Conference at the Royal Exchange theatre last night there was a protest outside Churchgate House, where the Greater Manchester civil service sits. The demand by homeless campaigners was for an audience with the recently elected Mayor Andy Burnham.

That thought stayed with me for the evening. I admire the work of Manchester A Certain Future, the city's climate change action plan, so was delighted to be hosting the event and leading a discussion. It puts some priorities in place for the city of 650,000 people to reduce carbon use and promote sustainable development. The targets slip away, but as the director Jonny Sadler outlined at the conference last night, there is some momentum and some urgency behind the city's ambitions to be carbon neutral by 2050.

But here's the thing. We had a wide ranging discussion last night about what those in cultural industries can do. The audience contributions were exciting and ambitious, sign me up for the Green Drinks Mcr, for starters. But volunteers from various voluntary groups and campaigners made helpful and creative suggestions for future priorities. But as you weigh up the achievements and start to think about what's achievable, it's pretty clear that the scope of the work to make Manchester carbon neutral falls short due to structural limits. Changes to housing policy are led by the Greater Manchester Spatial Framework on where new houses are going to go. Transport cuts right across borough and city boundaries. And the low carbon economy can't be created in the city centre alone. And how do you solve a problem like Peel?

More than one contributor last night - many more on social media - asked the question of what Andy Burnham was doing about this. Or where was he? Then people asked, to applause, why does the GM Pension Fund make investments in carbon businesses? What about the airport?

It is a matter of record than he has appointed the thoughtful and energetic Stockport leader Alex Ganotis to be the lead member on the environment. At his Digital Summit last week he announced that there will be a Green Summit too, to bring together stakeholders from across Greater Manchester to drive this. One of the challenges set last night was for a new board for Manchester Climate, a new chair and including members of the public. Who knows whether it will be funded long term by the city council. My hunch is that this important strategic work needs to adapt to these new political times and find a new home. Hopefully to make Greater Manchester the low carbon city region. More ambitious, scary targets, but done at scale. This is doable.
Posted by Michael Taylor at 4:37 pm