David Goodhart's Road to Somewhere and our journey to Oldham 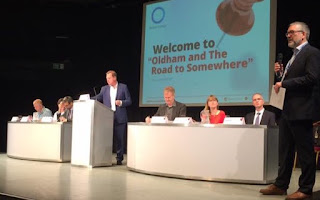 Author David Goodhart has contributed something substantial to the understanding of our confused new times. The backdraft from the EU referendum last year has been a constant debate conducted alongside an exposed fault line in society between two tribes of people. On one hand are the "Anywheres"; highly educated, mobile, not as rooted, international in outlook, well-travelled and comfortable with globalisation and immigration, and usually found in big cities, and they make up about 20 per cent of the population. On the other hand are the "Somewheres"; rooted in their decaying places, often feeling left behind, threatened by immigration and globalisation, and more likely to hold socially conservative attitudes.

Though it's a useful distinction and powerfully argued, Goodhart's compelling book The Road to Somewhere draws on these influences from a social and cultural perspective, rather than a political dichotomy between left and right. So far, so good.

If anything the 2017 General Election told us even less about the distinction than we could have reasonably expected in Brexit stricken Britain. As Goodhart said himself in the Catholic Herald last week: "the task of politics now is to create a new settlement between Anywheres and Somewheres which gives more space to Somewhere principles without hurting too many Anywheres. Theresa May produced an innovative programme that tried to do just that... but her own performance let her down."

At an event at Oldham College last month we wrestled with these and many other issues, with David present and ready to lead the discussion. There's a good account of that discussion, here, from the Oldham Chronicle.

I have a few issues with his central thesis. The first is personal, the second is the political expression of this dichotomy, the third is in his attempt to hang heavy charges on the university sector.

So, firstly, I don't fully buy that the Anywhere identity applies to anything like the numbers he suggests. Even as someone who moved from a Lancaster home to a Russell Group university, passed through London and Australia, settling 60 miles from where I was born, I was the offspring of itinerant post-war parents. But I hesitate to even begin to apply my own anecdotal experience into this sphere, because I think it's where Goodhart's arguments are at their weakest.

The University of Manchester has a corporate social responsibility programme that encourages staff and alumni to become school governors. Large international businesses in Greater Manchester mandate their senior staff to volunteer in their communities. Undoubtedly professional careers give people the options to advance in other places, but it's too convenient to assume the ties that bind them to a place are inevitably weak. In discussing this with my colleague who appeared on the panel with David, a French academic who is raising a family in Stockport, I tend towards less of Somewhere v Anywhere, but to consider the possibilities of a "Somewhere Else". Communities of people, brought together by where they live, shaping places into a diverse and different character by the contribution of changing groups of people and families.

As he closed the event in Oldham David Goodhart tossed in an anecdote that graduates of Russell Group universities have no close friends who aren't also graduates of similar institutions. It cuts to the heart of where these people go and where they end up? Parts of big cities, presumably. It's not my responsibility to disprove that, but Goodhart's to justify, but I suspect it's nonsense. I suspect too that there are more than a few anecdotes in search of suitable evidence, which is partly why I've indulged my own story too.

Second, there's the politics. There are large parts of the country where people feel that the system doesn't work for them. And when things don't work, you cast around for the causes, for who it does seem to work for. On page 225 he lists initiatives and government actions that were Anywhere priorities: Scottish devolution, the fox hunting ban, immigration, the Iraq war, EU expansion to allow Bulgarians and Romanians into the country in large numbers, £9,000 tuition fees, the Human Rights Act.

I read through that list with some sympathy. But it spoke to me of something far more fundamental to the British political psyche than Somewhere and Anywhere, but "don't take the piss", something I first heard articulated by a guy called Jonathan Simons at a Tory conference fringe last year. That to me comes closer to synthesizing the anger we feel all around us.  And there are a variety of political responses that coalesce around a number of no-go zones of moral relativism; all attempts to manage sensibly public spending is "austerity" and the automatic response to an act of Islamist terrorism is to say it isn't Islamic and to say otherwise is playing to the racist right. To me, that's where we've got stuck. There are tribes of people who think the other side isn't just wrong, but "extreme", "alien" and "dangerous". No-one is talking to one another. Everyone is shouting. The left behind feel ever more helpless.

Thirdly, he has it in for the university sector. In fact, not only is this the sector where I work, my job is to do all the things he suggests we don't do and that are the cause of many social ills. He identifies a “university or bust” mentality; “Today’s university option is sucking in more young people than is economically or socially desirable” (p230); "Modern universities have expanded far beyond any useful purpose”; and (p165) that it would be preferable to recreate elite vocational colleges with strong local connections.

Some of the charges I simply don't recognise within the sector. A big drive to create more apprenticeships, more generous support for technical training, better links within and between northern cities and more patriotic procurement are all pretty much mainstream ideas today in Whitehall, not least at the top of the agenda for the Metro Mayors.

I don't accept the binary distinction between what is offered in universities and what is more practical and rooted, or that the shift from polytechnic to university was a mistake. I accept a massive underfunded skills shortage, but the fingers are all pointing to the wrong place. I don't see the evidence that what is achieved at a modern university is to the detriment of technical pathways. Or that we don’t offer them. At Manchester Metropolitan, where I work, we take most of our students from the North of England, 40% from Greater Manchester. Many are what we call 'first generation' students. The percentage of pupils coming from the 20% lowest participation neighbourhoods has increased from 14.5% in 2011/12 to 16.6% in 2015/16. Universities provide high quality, cost-effective routes to advanced technical skills. Degrees should not be placed in opposition to technical education.

We currently recruit a third of all degree entrants from BTEC and other vocational backgrounds and are one of the leading universities in the development and delivery of Degree Apprenticeships with employers, a good example of a pathway that is both ‘technical’ and ‘academic’.

I'm going to leave it there. It's starting to sound like I've got a bee in bonnet about what is in fact a very helpful and fascinating contribution to our understanding of some big trends in our society. It's certainly going to have some influence on society, politics and education for sometime. Though I don't think it's as effective a summary of our psyche as "Don't Take the Piss".

Posted by Michael Taylor at 1:19 pm