Why everyone's wrong about Arlene Foster and the DUP 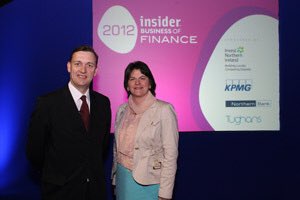 Back in 2012 I took a finance conference to Belfast. It wasn't unusual to get some warm words from a local politician, but in Northern Ireland we were greeted with enormous appreciation from devolved government, notably by Business and Investment Minister Arlene Foster, as she was then, First Minister of Northern Ireland and supporter of the minority Conservative government as she is now.What struck me more than anything in the couple of years that I regularly hopped over to work in Belfast was the powerful desire to be seen as a "normal" part of the United Kingdom, somewhere that business is done, where visitors are made welcome and that peace was permanent.

The last issue they're going to raise as part of a UK settlement is gay marriage and abortion. That wasn't on the table when they negotiated with Gordon Brown's team in 2010 and it isn't now. I don't doubt for a minute that the infrastructure spending in Northern Ireland will form part of the long promised 'peace dividend', and that concessions will be made to many of the campaigns that politicians on all sides in Stormont have made over the last twenty years. These include a competitive corporation tax regime with the Republic and further inward investment incentives.

At the heart of this hostile assault on the DUP is a depressing characterisation of the people of Northern Ireland. That they are the other. That there is more that divides us, than unites us, if you want to put it like that.

Jenny McCartney in CapX makes these points very well.  "The level of vitriol has been disturbing even to those of us from Northern Ireland who are both wary of the DUP’s social conservatism and familiar with its flaws: the Paisleyite inheritance, the party’s dwindling rump of religious fundamentalists and creationists, the energetic self-interest and intermittent financial scandals. But the ecstasies of liberal piety and fury in the British press at any potential deal with the DUP – the sort of deal that Labour sought in 2010 – have gone beyond normal political criticism and plunged into outright hypocrisy and untruths. It was as if – hemmed in by correctness on all sides – many, mainly English, pundits were finally relishing the unleashing of fire on people they could feel really pious about hating."

The greatest misgiving I have about Arlene Foster was her poor handling of the botched biomass scheme, or "cash for ash". But she has stuck it out. The price of failure is a high one in Northern Ireland, so too is the value of unity around a project for peaceful co-existence, compromise and forgiveness, as Stephen Bush acknowledges, here: "The election result, in which the DUP took the lion’s share of Westminster seats in Northern Ireland, is part of that. But so too are the series of canny moves made by Foster in the aftermath of her March disappointment. By attending Martin McGuinness’s funeral and striking a more consensual note on some issues, she has helped shed some of the blame for the collapse of power-sharing, and proven herself to be a tricky negotiator."

I'll leave the last word to Jenny McCartney again, who goes on to say: "Foster is, in fact, a member of the Church of Ireland who happily drinks alcohol and only joined the DUP in 2004. She spent the day before the election in Messines, Belgium with the outgoing Taoiseach Enda Kenny, commemorating a WWI battle in which unionist and Irish nationalist soldiers fought side by side. When necessary, she has attended local events alongside the Sinn Fein MLA Sean Lynch, a former close comrade of the late IRA man Seamus McElwain, whom Foster believes attempted to murder her policeman father and succeeded in wounding him. How many armchair pundits have had to negotiate such a complex past and present?"

POSTSCRIPT: Here is a brilliant, concise, but detailed examination of the deal by Ciaran McGonagle, that summarises the very clever negotiation by Arlene Foster on this. It's on politics.co.uk.
Posted by Michael Taylor at 10:52 am