Jonathan Schofield and Manchester's "betrayal" of its radical history 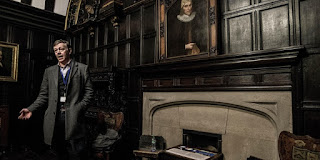 I could listen to Jonathan Schofield all day. I could listen to a talk on Manchester's radical history for even longer than that. So last night at Manchester Metropolitan University's 70 Oxford Street, the building that used to be the Cornerhouse, I listened and watched as he took us on a proper trek through Manchester's past.

The proposition our favourite tour guide and historian put to us was this: has Manchester betrayed its radical roots? It's a story of nuance and myth, heroism and sacrifice. But it's ultimately a story about the thing that really encapsulates Manchester's real radicalism - pragmatism and progress.

I won't attempt to summarise his talk, instead I'll point you to his excellent books. But I will take three examples that rather show we haven't betrayed our past in the way some may think. Jonathan's journey took us from the development of the town of Manchester, England's least aristocratic, through the English civil war and the siege of 1642, the stubborn non-conformist Christians who challenged the divine right of kings to rule. He talked about the beginnings of opposition to slavery, a careful case built against it by the preacher Thomas Clarkson, a direct influence on William Wilberforce who eventually succeeded in outlawing such barbarism, despite opposition from the Liverpool dockers who tried to kill him.

Secondly, Manchester's radicalism was, he argued, middle-class and non-conformist. Even the reaction to Peterloo - the birth of the Chartist movement - had a moderating force despite its entirely reasonable demands for universal (male) suffrage, the victories of this soft radicalism - the vegetarianism and municipal parks of Joseph Brotherton, John Bright's opposition to the needless Crimean war and Richard Cobden's free trade treaty with France were all touched not by insurrection and revolutionary radicalism but by a rounded and benevolent pursuit of the common good.

Thirdly, the incredible achievements of universal women's suffrage were characterised by a determination, a collection of evidence, a persistence and a refusal to shut up. Isn't that so very Manchester. And then there's Engels observation of the 3000 people gathered in a socialist hall on a Sunday that no Englishman can go three minutes without telling a joke.

So, I don't think Manchester today is a betrayal of those roots. What we do now, based on evidence, decent moderation and noisy anger traces a direct line to all that in some form or other. True, we all don't do enough, like voting in greater numbers, for a start. Change dot org and Facebook clicking absorb our own calls to radical action, while much is so wrong in the world we seem unprepared to do much about it. But isn't it something that there has been a sea of flowers around the statues of Cobden and Bright in St Anne's Square. Those flowers are our response to an act of medieval barbarism, not an act I would ever describe as radical, never. Flowers next to statues that commemorate an idea that we should be tolerant, open-minded and free to exchange ideas and the fruits of our common endeavour.
Posted by Michael Taylor at 4:43 pm