Tony Mowbray - what a difference a manager makes 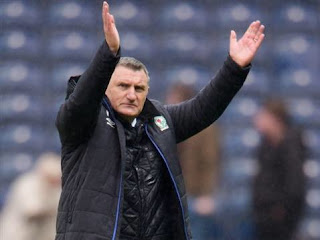 There's been plenty of talk over the last couple of weeks about players getting a manager sacked. The performance of the Leicester City team after the owners had sacked Claudio Ranieri was statistically and demonstrably better than the ones that cost the previous manager his job. So what of Blackburn Rovers?

Three games, an away draw and two home wins since the new manager arrived. It's the same players, so did they let Owen Coyle, the previous manager, down?

- more confidence in midfield, a readiness to move forward and press
- like for like substitutions, none of the baffling tinkering under Coyle
- Stronger in the last ten minutes

I type this as I listen to Owen Coyle's shallow patter on Channel 5. I'm pleased he wishes us well, I'm sure he's a decent man with frustrations about the owners that he's keeping to himself, but as a manager he clearly came up short.

However, on the way home I heard more in a ten minute Radio Rovers interview with Tony Mowbray, about how to manage a football team, than I ever did in all the dreary platitudes from Gary "give it a right good go" Bowyer, Owen "good group" Coyle and Paul Lambert, who talked in riddles.

Mowbray mentioned the performance analysis team. He talked openly about how he hasn't had enough time to work on the training ground with the defenders, about how he's got better performances out of Marvin Emnes and Liam Feeney. I could have listened to him all evening, he spoke with great affection about the players, the club and the fans. I might eat my words at the end of the season if we go down, but for the first time in a while I'm just going to enjoy the glow of confidence that we have a manager who knows what he's doing.
Posted by Michael Taylor at 10:34 pm