Honestly, it would have been better if we'd been relegated last season.Grim reflection on Rovers loss to Norwich 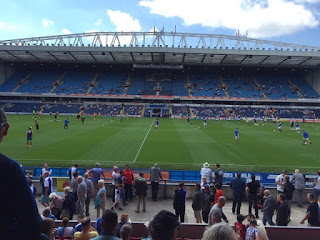 I always feel optimistic at the start of a new football season. The sun is shining, the horrors of the previous season are long forgotten and every team starts afresh. We'd also moved to superb new seats right on the half way line, no restricted view and perfect for keeping that Maltese tan topped up.

In our usual pre-match prediction I even shed my nauseous negativity and predicted Blackburn Rovers would beat deflated and relegated Norwich City, expecting they'd be unused to the rough and tumble of Championship football, just as Newcastle proved by surprisingly losing to Fulham the night before.

Joe and Louis, far better readers of football than I, went for a loss and a draw respectively.

We shouldn't really have been surprised. Why on earth a team consisting of 10 of the same team that were crap last season, plus a new signing from relegated Bolton, would find a winning mindset should be obvious. Norwich, relegated they might have been, seemed to assert their collective superior quality in order to prove a point. Rovers, frankly, have no point. Even before the opening goal I couldn't work out a game plan that played to the collective strengths of the team.

If there is a sliver of optimism it is that the three subs who were introduced, three new signings to boot, were the three stand out performers. Gordon Greer can potentially boss this team, Anthony Stokes shook off the curse of wearing Chris Brown's lead lined number 9 shirt by scoring and Jack Byrne looks like the first Rovers player since Tom Cairney who can do the unexpected AND turn an opponent in midfield.

They are also the only three players who are winners. Once the first goal went in the rest of the squad did what they did all of last season. They fell to pieces. They have no collective belief. No options. No answer to the constant puzzle about what Ben Marshall's best position is. No confidence in each other to grip a game of football.

Part of me suspects the manager knew all of that. He wanted the team he inherited to prove what they were all about and they stooped to that challenge.

In many ways it would have been better if we'd been relegated last season. I know that sounds dreadfully negative, but I don't think we can bounce back until we hit our floor and we haven't yet. We're sliding down the pecking order in the Championship, outspent, out thought and out supported by more and more clubs. A club in perpetual decline with no real plan to arrest it.

It's going to be a fairly grim season I'm afraid.
Posted by Michael Taylor at 9:09 am