The Face - the magazine from 1983 that defined my life 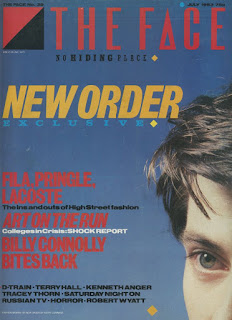 Back in early July, I finally managed to track down a copy of the ultra rare July 1983 edition of The Face magazine. Reading it now it is such a treasure trove of personal memories and cultural totems.

Foremost is Kevin Sampson's splash on football terrace fashion, probably the first such piece in the media. A chronicle of something I knew, something that lived, but was truly of the street and not in any way media made. But there is also a rare interview with New Order, pre-Blue Monday, which massively opened my eyes and ears to them and what they were all about.

But it's also got so many of the staples of my journalistic and cultural upbriging, Robert Elms, Julie Burchill and one of those random Face delights about horror films.

I bought mine at WH Smith's in Lancaster, providing a massive vindication to my sartorial leanings back then, but I lent it to one of the Blackburn lads when we went to Swansea away and I never got it back. Maybe I influenced a movement, maybe it just got binned.
I was a habitual Face reader, later migrating on to i-D and Arena, but this was the starting point. I simply can't overstate how influenced I was by The Face, and subsequently all that was inspired by the publisher Nick Logan and his crew - it shaped not just what I consumed, but how I approached journalism, ideas, politics, design, aesthetics, fashion, music. Even my university dissertation in 1988 was about male sexuality and the modern media (I'd have got a first if my approach hadn't been so 'journalistic').

I have searched for ages for this particular copy and am embarrassed to say how much I paid on eBay, but it's going in a glass case.
Posted by Michael Taylor at 8:23 am