The UKIPs are coming


Like many people I laughed and laughed at Stewart Lee's acerbic put downs of "Paul Nuttalls of the UKIPs" in his 2014 comedy sketch, where he lampoons their deputy leader. I've shared the disdain at the ludicrous spectacle of Nigel Farage and some of his rabble.

If they're honest, a lot of people in different political parties still regard UKIP as a bit of a joke. Even their only MP, Douglas Carswell, seems a bit embarrassed by his colleagues.

But the Brexit referendum has changed everything. If anyone thought that UKIP weren't a threat to Labour in the North, they surely can't think that now.

I went for a drink with a mate the other night and we bounced around the idea of where Labour go next, of which that will be another blog for another day, but we also discussed where UKIP go from here.

The optimistic theory is based on the premise that UKIP are a shambles, Labour still command tremendous loyalty, that the brand still has some heft, that Labour also still has a formidable ground operation, while UKIP does not. They have reached their ceiling and their toxicity will keep them there.

Matthew Goodwin and Rob Ford's pioneering book on this - Revolt on the Right - identified early on that UKIP were more than a Eurosceptic right flank to the Tory Party. The answer to questions posed by Owen Jones and John Harris that there should be a UKIP of the left was answered by the reality that there was a UKIP of the left, it was called UKIP.

Anecdotally, let me share a story from the 2015 General Election. In Ashton Under Lyne, UKIP fielded a candidate called Maurice. He admitted at a hustings event that he knew nothing of UKIPs policies beyond being anti-immigration and leaving the EU. He even admitted he was a paper candidate. He got 8000 votes and came third just behind the Tories.

The optimistic scenario recognises the issue of immigration is a problem for Labour, but builds into the numbers a natural ceiling for UKIP of about 20%. Pretty much where Maurice ended up. Never quite enough to win anywhere, but enough to change the weather nationally.

Talk to a UKIP activist about GOTV, voter ID, the marked register and they look at you blankly.
Either a formidable ground campaign makes a critical difference, or it doesn't. If there's a lesson from the Leave campaign it's that many of the old rules don't apply like they used to. Untrained activists have come into the party, surprised at what needs to be done to win, but older hands have learnt with each election.

This piece on Conservative Home looks at the ground operations of the EU referendum.

It includes a raw assessment of the weaknesses of the machinery: "It hasn’t all run smoothly. I gather some areas have experienced difficulties in encouraging UKIP volunteers to move away from the less targeted but higher-visibility tactics which are core to a smaller party’s campaigning, such as street stalls, and towards canvassing and data-gathering. Others report their surprise at finding some UKIP branches to be much smaller than they had expected. Both of these factors fit with the difficulty Farage and others experienced last year in translating energetic campaigning into victory in target marginals. The People’s Army are certainly enthusiastic and in many cases very experienced, and in some places they are proving very effective, but in terms of troop numbers or strategic approach there appear to be distinct shortfalls in some parts of the country."

You take all of that on board and then you confront this: They won. Brexit is a reality. People voted for it, people who normally don't bother to vote actually cast a vote for something that mattered. Why won't they do so again? The Leave campaign funder Aaron Banks has his tail up and is prepared to chuck more money at this project to build on the success of Brexit.

The other shifting factor is the leadership. The BBC have given a frequent platform to the florid Nigel Farage. For better or for worse he has been the brand. The change of leadership provides a true fork in the road. Stephen Woolfe and Paul Nuttall are itching for a chance to take on Labour in its citadels in the North. Suzanne Evans provides a gentler tone that doesn't frighten middle class liberals. 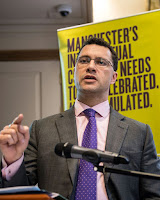 I've debated with Woolfe and he's frightening. A mixed race Mancunian with forensic attention to detail, he lacks natural charm and humour, but has the brass neck to debate in Manchester and without irony, evoke the spirit of Peterloo.

I've observed Nuttall up close and he possesses that homespun working man authenticity that would have cut through with angry working class males. He doesn't sound like he's slumming it with the workers on a RyanAir flight, as Suzy Stride said Labour activists appeared to during the 2015 General Election.

That's the case for UKIP. But the other reason why Labour will lose, of course, is because Labour seems determined to be irrelevant.

Posted by Michael Taylor at 2:30 pm