Sir Max Hastings at The Strand Group, while history unfolded outside 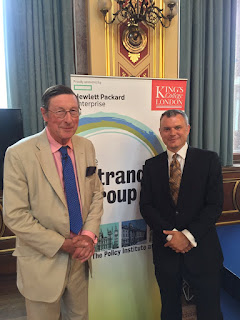 While history was being made last night, we gathered in the Foreign and Commonwealth Office to hear one of our leading historians, Sir Max Hastings, deliver the Sir Michael Quinlan Annual Lecture. The event was curated, hosted and presented by Dr Jon Davis, someone who has been influential in my recent career change, and frankly inspirational in how he has delivered public engagement from his berth at King's College London, the Policy at King's initiative and the Strand Group.

Alongside former permanent secretarys, ministers, and no doubt representatives from the guardians of our security - to quote Sir Max - the "spooks, geeks and thugs" we witnessed a provocative and timely look at Secret Wars and Future Wars from the prolific author and former Telegraph editor.

I took three things from the lecture, these are my thoughts, not those of either speaker (I'll add a link as soon as it's available).

Posted by Michael Taylor at 4:07 pm