Why we lost nationally, the 5 key moments that told me it was like 1992 all over again. 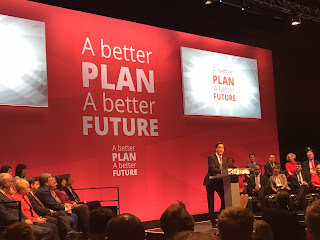 Ed Miliband. "Your leader is a plonker and I wouldn't let him run a shop, never mind the country." Ouch. That came from a high profile personality I spoke to, someone who has made a fortune judging public taste and moods. He wasn't alone, neither were the people on the doorsteps and high streets we spoke to in their large numbers. It wasn't the media twisting the truth with snaps of bacon sandwich munching, but a deep seated lack of empathy with a leader the public just didn't take to. I feel bad for him, because I genuinely grew to admire Ed Miliband as the campaign went on. I really liked authentic warm Ed who met nursing students and spoke candidly during an hour long Q&A.

Tory tax cuts for millionaires. I hosted a round table for business people in Manchester with Andy Burnham in late 2013. I made the point that whenever Ed Balls spat out the word "millionaires" he was saying to every single person who ever dreamt of making a few quid with a new business idea, or  building a company, that Labour aren't on your side. The top rate kicks in at a rate that anyone who earns a bonus looks at and feels is achievable. This is important at a time when a million new businesses have been formed, where a new entrepreneurialism has genuinely swept the country. And that line wasn't just an early throw away, but became part of the key message of the campaign.

The Question Time mauling. There were many, many media interviews that I winced at, where I wanted to crawl back under the duvet and wish it hadn't happened. But BBC Radio5Live and the Today Programme presenters give all as good as they get. No, the Question Time bear pit was the moment the real rising anger of middle England gave it to Ed Miliband with both barrels. It was the debate when friends on social media burst out of their silence to tell me why they would never back me, or Labour, and that the game was up. The aftermath was even worse - blaming the BBC for putting up Tory plants. This was a party in denial about the genuine raw anger from people in the country.

UKIP.  We had nothing to address this. No convincing way of confronting UKIP voters who are worried about immigration and think Labour doesn't speak up for them. Just a different way of telling them they were wrong. You don't change people's minds like that.

The body language of our Tory opponents. There was a moment 10 days before polling, when the postal ballots had been tallied, that Tories in Hazel Grove started to look brighter and more confident. Sure, we had local conditions in our own election that were at play, but if they were "winning here" they were winning everywhere else too.

All of this is far from exhaustive, but they were moments that struck with me. Tomorrow I'll look at our campaign locally and the lessons we learned.

You didn't even have to be a millionaire to feel left out of the lefty circle jerk.

Everyone was assuming I was a Tory just because I own a business. There was nothing that spoke to me in that campaign.

The party needs to go back to New Labour policies if it wants power again.

The reality might be that it was just 'too soon' after 2008 for Labour to stand ANY chance. The dark spectre for you might be that Labour can never be a national party again.

At base, whatever the passing opinion polls said, the detail showed your problem. While twice as many people thought Cameron was trustworthy and even more thought he'd be a better PM than Ed, the dissonance was in the closeness of the opinion polls, not in the difference between polls and result. It was always going to tell when people stood in the voting booth). Obviously the Clegg route (apolgize early, apologize often) didn't work, but finding a new non-Balls generation might have helped.

While you tried to be a responsible party (I could argue, with their spending pledges, the Tories actually out-flanked you to the left), that image always hung over you and there was no expunging it.

But underneath lies the bigger tactical problem. You haven't won an election in forty years without someone called 'Tony Blair' at your head. You haven't won one in nearly seventy without Blair or Wilson. They were similar in a lot of ways, they did the Reagan-in-reverse job of tying together the core vote with the aspirational southerners--you won Essex Man under both of them. But you can no longer rely on that core. UKIP is a huge threat, with or without Farage. Where now is your heartland? Hampstead?

I blogged over a year ago that Labour wouldn't win my local constituency (Ilkley/Keighley) because, despite everyone saying something different, UKIP were going to take from Labour not the Tories. I dind't get any sense that Labour took this threat seriously, or had any tactic to deal with it. A mug with 'immigration controls' on it doth not return the white working class to you.

There's an even bigger concern coming out of this. For those of us on the right, there's been a frustration that the link between Conservatism and more recent immigrants has never really been built. It might just be getting there--the Tories came second in Manchester City Centre with a Chinese candidate. In the locals, in the places I know well, they took Keighley Central, a very poor area. George Grant massively increased the Tory vote in Bradford West. How will that play out...

Oh and you should have supported PR as LabourList suggested at the time!

The stone tablet was a poor decision. It allowed the right wing press to ridicule Ed and the party very close to election day. I didn't meet anyone that didn't think it was a ridiculous idea. Whoever came up with that idea needs to consider if they really are in tune with what resonates with the public.