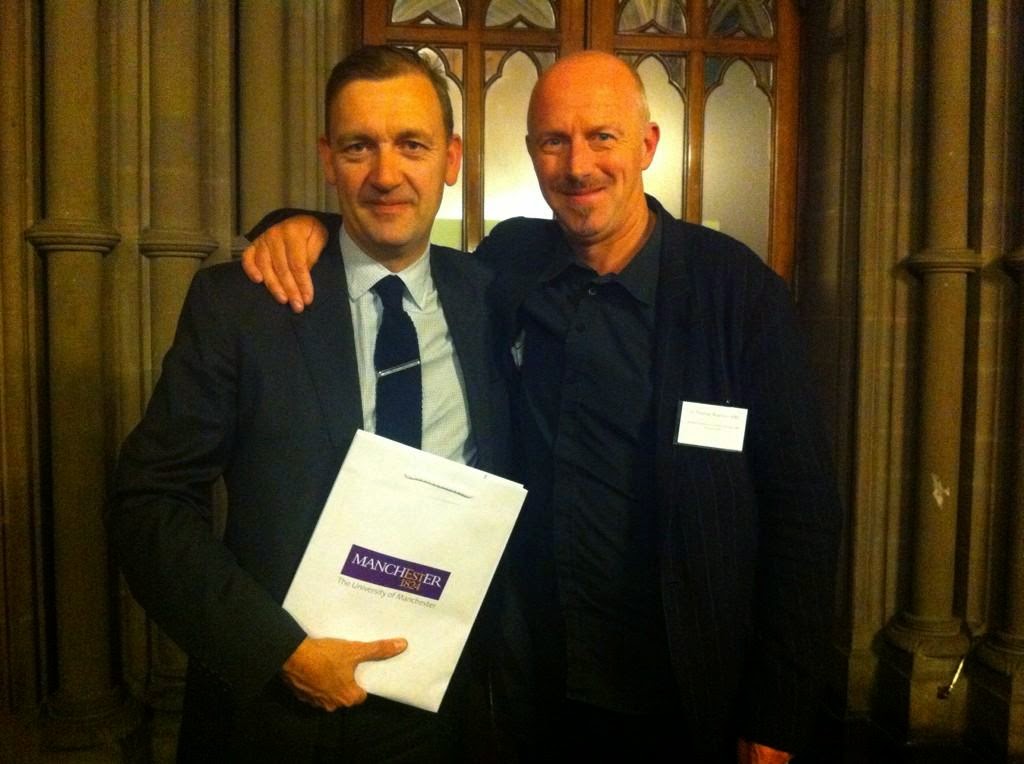 It's been a while since I updated the "my mate" series. It's not because I've run out of mates or anything, but more a symptom of slower blog activity to be honest. Last Wednesday I was at the University of Manchester Alumni Dinner at the Town Hall, where the guest speaker was Tom Bloxham, the Chancellor of the University and the chairman and founder of property company Urban Splash.

We had a chat afterwards, as we often do on such occasions, and he reminded me of the times we've shared together over the years - the acquisition of my favourite hotel - The Midland in Morecambe - by Urban Splash, his innovative property business and how he used some of my articles about it in the exhibition before the launch;  how consistently supportive he was in my time as editor of Insider, speaking at events - always superbly; but socially too we've had some enjoyable times together - his wife Jo's joyful 40th at their house in Worsley and a terrific Christmas lunch with some of our other mutual friends like Ian Currie. Tom also invited me to join him at Old Trafford for United's annual drubbing of Blackburn Rovers, I declined, that being the time we won against the odds of course.

We're from the same neck of the woods politically - the pro-entrepreneur arm of Labour - and he's most recently been a contributor to the Labour Party's review of housing under Michael Lyons.

But I also recall a University General Assembly meeting during my lengthy and painful 12-month notice period as I was exiting Insider. I asked a question about what the University was doing to leverage its academic base to connect better with the intellectually curious in the city. A good answer would have been to list a number of public lectures and open days. Tom's answer was brilliant, he leant forward and asked me, "what have you got in mind, Michael?"

That encouragement was the first step on the road to developing what is now DISCUSS and I've never forgotten his support. Indeed, our motivation is part of the same civic pride to make our adopted city better than we found it, in line with his own well-used anecdote about the Ephebic oath of the ancient Athenians.

I always enjoy Tom's company and seeing him at the dinner last week reminded me of the friendship we've developed and how fond I am of him. I'll say this as well, he'll be a hard act to follow as Chancellor.
Posted by Michael Taylor at 7:51 pm