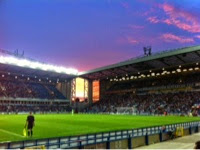 It was a perfect evening for football last night. It was an imperfect night, but on balance you have to be pleased with a point and the performance.

I never got round to doing a season preview last week, but frankly I couldn't really add much to the peerless optimist Mikey Delap on his Wild Blackburn Rover blog. I thought his most important point was this one:


"What we lacked last season was that mental toughness and confidence to close games out. Sure part of it can always be apportioned to organisation and the system you've set up - but ultimately calmer heads and better retention of the ball turn those desperate late defensive lunges into a routine defensive clearance and that hoofed clearance into a more astute, pressure relieving pass."

It was heartening that we came from behind last night. Tom Cairney still has that urgency and energy to unlock teams and pull rabbits out of the hat, but last night in the second half we dominated midfield and possession because of the protection and cover and challenges of supersub Lee Williamson, who I thought was our best player. Kilgannon was the strongest in the first, despite conceding at a set piece, something that needs to be worked on as the better teams will have a strong physical striker like Jones to be bully around the box.

I loathed the new kit before last night. I thought it was a departure from tradition and made us look like Coventry City (nothing against them). But seeing it close up it's actually remarkably close in shades to the 1991-92 shirt. That away kit is dreadful though, the worst we've ever had.

I was staying away from Ewood in protest and just doing away games, but last night was another step back. Last season we had a few invites and comps, but this was putting money on the counter.

Finally, Venky's were there last night. Most fans will never forgive them for allowing our club to be wrecked. But it's fair to say now they are propping up a loss-making business, proving that their greatest error was to trust certain people who took them for fools and by their stubborn refusal to listen to sense, but we are where we are. Better this than what is happening at Leeds and Blackpool. Hopefully dialogue will soon follow with the Trust and other positive potential partners.

Arte et Labore.
Posted by Michael Taylor at 9:04 am