The book pile - the first six months - done now, onto another soon 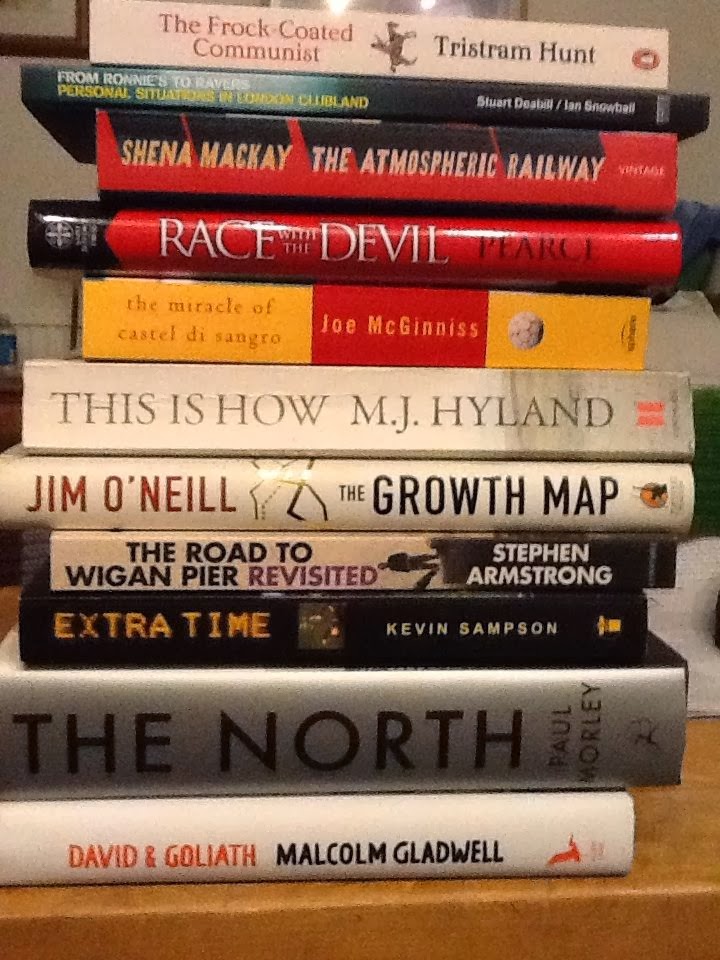 I set up the challenge to be disciplined about my reading pile and plough through a number of titles I've been putting off, a few that had been bought for me and a couple where I'd been to an author reading and had them signed.

I've finished now. I gave up on Shena Mackay's short stories. Maybe another time, but I wasn't gripped. There are reviews of Kev Sampson, Joe Pearce, Paul Morley, Malcolm Gladwell and Maria Hyland up already.

Stuart Deabill's Personal Situations in London Clubland was a brighter read, I especially liked the Small Faces stories. One of the skills in putting together a book like this is having a good ear for a tale. Fair play to Stuart for crafting a compact and readable tome that stretches a long period.

There's a piece in the pipeline for STAND about the strength of lower division football in England. It was inspired by the Miracle of Castel di Sangro by Joe McGinniss, which tells the story of how a small club rose to Serie B. It seems in Italy they have a Premiership, then the equivalent of League One, then the Conference North and Conference South.

This and the Kev Sampson one were gifts from my friends Mike Emmerich and Neil Tague. There's something special about enjoying a book that someone gets for you. You start to reflect on the things that bring you together and what you like about your friends.

Did I only read these books? No, I cheated. I sneaked in a few on holiday like the new Tony Parsons crime book, The Murder Bag, which was very good. He's found his muse again, it seems. I read a  Lee Child book I found on the campsite library when I'd run out. He has a talent for creating a page turning, but it isn't literature.

The Parsons book I read on a tablet, something I haven't taken to. There are three things I like about physical books that a tablet or Kindle can never displace. First, finding them in charity shops, church sales, of someone's discarded pile; second, getting bought one by a friend who thinks you'll like it; and thirdly, just the sheer joy of handling it and seeing how far you've got to go and holding it up when someone asks you what it is, especially if it's signed by the author as a few of these were. Call it showing off, maybe. But it's been a while since this book did some namedropping.