Race with the Devil by Joseph Pearce 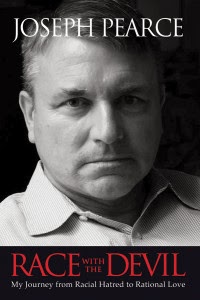 Those of us of a certain age and of a certain political persuasion will have had some run-ins with the far-right. Marching against the National Front in the 1970s and 1980s was an important part of your political education. Those of us who took an even more detailed interest in the people and personalities of the struggle will remember the name Joe Pearce. He was the leader of the Young National Front and the editor of Bulldog. One of the enemy.

I was a subscriber to Searchlight magazine for many years and rather enjoyed seeing the far-right fragment as bitterly as the far-left was capable of doing. It was also good to read of whistle-blowers and further startling revelations from deep inside the beast. Former fascist street warriors like Matthew Collins and Ray Hill properly turned the tables on their former comrades. Other names faded from view. One was Joe Pearce, who later resurfaced a biographer of GK Chesterton and had undergone a journey to the Catholic faith.

At this point some have thought that journey isn't a particularly long one. Indeed, Gerry Gable in Searchlight doesn't believe Pearce is for real. There's a piece where he describes the christian thinkers that Pearce has written about as notorious anti-semites. Frankly, this is bollocks.

Personally, I enjoyed most of the book. I wasn't impressed with how he referred to those protesting against the Front as "Marxists". The leadership of the Anti-Nazi League may have been, but most people who hated what he stood for were just ordinary decent youth.

One of the best tales was when Jake Burns of Stiff Little Fingers took Pearce for a beer and tried to talk a bit of common sense to him. By showing him a bit of human love, he lit something in a life consumed by hatred and prejudice.

I'm a Catholic, but I can't claim to understand theology or the liturgy in the way Pearce does. Instead I do rather respect how he's chosen a path of life that boils down to the simplicity of the message.
Posted by Michael Taylor at 11:08 pm