The Beautiful Game No More - football has sold its soul. Discuss. 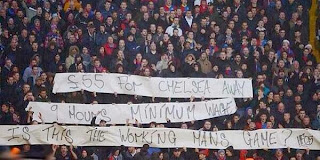 You could wax lyrical all day about football and how the beautiful game is no more. I must admit, I fall out of love with it all the time, but it's part of me and there is still something amazing about every game I go to.

This project I've been involved with - Discuss - has at its core, a mission to help facilitate debate about life and the passions of the people of the North.

We've had some belters so far - social media, HS2, Thatcher and Manchester.

Our next debate is about football and it will bring together fans, people in and around football and a special celebrity appearance in the shape of TV's Graeme Hawley who as well as being John Stape in Coronation Street is also an unhappy Coventry City supporter.

Doors open at 6pm, debate starts at 6.30pm. We finish formal proceedings at at 8pm. We then encourage after show Digressions. Tickets are priced at £7.

The way it works is that each side has 8 minutes each for their two speakers to make arguments for and against the motion.

Argument for the motion
A game beset by greed, finance and the worst excesses of human nature. Football has become tainted and distorted. Top class football, especially in the Premier League, the so-called richest league in the world, has become a rich man’s plaything. It is no longer within the reach of ordinary people. It can no longer claim to be the beautiful game.

The argument against
On the other hand, football is the most popular sport on the planet. It has the power to inspire and transform lives. The amount of money coming into the game is a reflection of this. And at its essence is the beauty of the simple game – two teams playing to the same rules all over the world.

Speakers:
For the motion
Graeme Hawley, actor known for his role as John Stape in Coronation Street and Coventry City supporter.
Dr Annabel Kiernan, senior teaching and learning fellow, Department of History, Politics and Philosophy) and director of The Centre for the Study of Football and its Communities (CSFC) based at Manchester Metropolitan University.

Against the motion
Professor Tom Cannon is Professor of Strategic Development at the University of Liverpool Management School. He is considered to be an expert on Sports finance, economics and business notably professional sports.
Colin Bridgford, chief executive of the Manchester County FA.