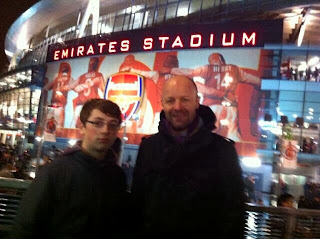 When I lived in London, Arsenal were my local team for the most part. To this day it's the only ground I've seen Rovers play at and walked home afterwards. There is a theory too that you should support the team you were born nearest - that would nudge my eldest son Joe towards the Gunners, but he's for the Rovers still.

Since the Arsenal moved from Highbury, I haven't managed to get to their spectacular new stadium, named after a Middle Eastern airline. Architecturally, it is a colossus, rising with real presence out of a complex urban mismatch of uses and serving to lift the area, rather than simply plonk down in the middle of a wasteland as the City of Manchester Stadium does. It also symbolises and represents the transformation of modern football, bigger, quieter, catering for the fan as a consumer. The seats were the most comfortable I've sat in at football, the leg room the best, the sight line perfect. The crowd definitely seemed even more gentrified than the new breed at Manchester City and the prawn sardine brigade at Old Trafford. Note: we were in good seats, but not corporate. One female fan near us was loud mouthed, passionate and frankly a bit of a berk. Most other people were supportive, but sedate, highlighting her boorishness even more.

The football was a reminder of what we were used to in the Premier League - a gutsy lower table side trying to out fight and defend against an infinitely more skillful Big Club. 2-0 was cruel on Cardiff, but we were pleased to see goals. Joe's prediction of the 1-0 to the Arsenal, as the old song went, looked the most likely outcome throughout.

That was my 138th ground on which I've watched football and the 66th of the current 92. There are very few easy to reach stadiums to get to now from the 92 - though we could chalk off Morecambe and Fleetwood soon.

Massive thanks to Joe's Godfather John Dixon for taking us and to our old pal Mark Sibley for letting us keep his seat warm.

Posted by Michael Taylor at 8:23 pm