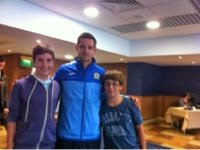 We returned to Ewood Park yesterday for the Blackburn Rovers v Huddersfield Town game. We had great seats, were in fine company, we got well fed and the boys met the man of the match, Scott Dann, above.  We had a good day out, no question about that. It didn't ruin my night that we drew and I wasn't angry about Venky's either.
I have refused to renew our season tickets out of protest and I did stubbornly say I wouldn't set foot in Ewood Park until Venky's left. But I also wasn't enjoying it enough to justify an 80 mile round trip every fortnight. My kids have missed it though. And when the opportunity to break bread with Richard Slater came around, I couldn't resist.
There's also been a change in expectation. After the torrid last few years I simply hope for a quiet and steady period of stability. This is a young team with an inexperienced manager. The team probably lacks a killer edge, but they at least seem to have a clear sense of how they are meant to line up and play. At Doncaster the pass and move style fell to pieces, but yesterday they persisted.
Scott Dann had a good game, in fact the two centre halves bossed it at the back for the most part, save for a rare chance that forced Jake Kean to a fingertip save.
Behind the scenes the club is still facing the financial abyss. Massive losses and reduced income point towards a meltdown at some point. And it's only a matter of time before Shebby Singh pops up again to embarrass us all. But for now I'll happily settle for honesty on the pitch from a team that can only get better.
Posted by Michael Taylor at 1:26 pm