Lessons in life from Lloyd Dorfman 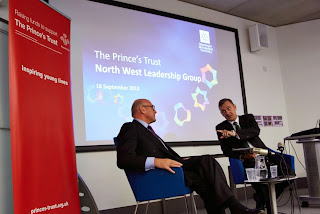 Lloyd Dorfman was in town this week. He is chairman of Travelex, the people you probably change your money with when you go on holiday.

I had the honour of interviewing him at an event for The Prince's Trust. He’s a class act, a proper gent and he has an incredible grasp of detail. I wanted to get from him some inspirational stories, some anecdotes about his life, why he is such a generous supporter of the arts and of charities like The Prince's Trust and what has driven him through his life.

He started his business in the toughest of economic times. In 1976 the odds were stacked against him when he founded the company as Bureau de Change from a single shop in London and now trades more than 80 currencies in more than 50 countries.

As he built the business up, he had to fight to get into locations like Heathrow Airport. He battled the vested interests of banks and dominant players. When the opportunity came along to bid for Thomas Cook’s financial services arm, Travelex was prevented from even entering the ring. He bet the whole business on sealing that deal, but it proved transformational and projected the business to a global stage. When he eventually took cash out of the business, selling to Apax, he stayed involved, keeping a 30 per cent stake and retaining his role as chairman. Not executive chairman, not non-executive chairman, just chairman.

I didn’t pick up on this until later but so many of his stories weren’t just about the obstacles that he’d overcome, but how a relationship with a real person turned it - the official at BAA, the Thomas Cook shareholder who ushered him into the auction which led to him buying it. His relationship with his CEO Peter Jackson.

I thought to myself, even a man who operates at the very top of life thrives on such basic raw connections. It starts to emphasise something we can all too often forget: people sell people and people don’t buy from you if they don’t like you.

More than ever this is a connected economy. We are frequently reminded of this, but I firmly believe this firm human contact is more important now than it ever was. The foundation of businesses like LinkedIn warehouse your network and treat your contacts like a commodity, but you always run the risk that you miss out on what is important to any individual.

So, there you go. Spending time with one of the most successful businessmen of his generation teaches you the most important lesson in life. Don’t be horrible.