The Villain - The Life of Don Whillans by Jim Perrin 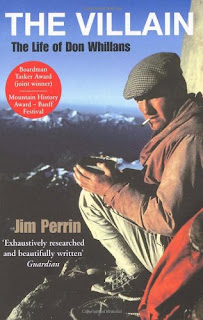 Just finished Jim Perrin's exhaustive biography of the cult figure of Don Whillans, a climber and mountaineer who never really belonged. It struck me that his drinking and his bellicose aggression fit that mould of working class men who invite the tag - 'could have been greater' but achieve cult status anyway. You think of Gazza, George Best, Liam Gallagher. A generous view will have it that they fought incredible odds to achieve amazing things in the face of establishment hostility - or they use their upbringing as an alibi for failure.

Whillans came from Salford and was a brawler and a rough neck, yet he found an expression in rock climbing. His love of exploration starting when his parents took him to stroll around Roman Lakes in Marple (so there's hope for my lot yet). In his life, which Perrin has been meticulous in researching, he climbs all over the world and with climbers who became household names - like Chris Bonington and Doug Scott. He becomes a popular lecturer and even appears on This is Your Life and other TV programmes.

My own personal interest in his story comes from my Mum's dear friends Ian and Nikki Clough, both no longer with us. Ian had died on Annapurna in 1970, an expedition that Whillans was on, and was described as epoch-making. Nikki had cancer and passed in 1983, which hit my Mum hard at the time, and it seems, Whillans too.

I love books that get under the skin of a culture and Perrin does this in great detail and with searing honesty. There was obviously a terrific bond amongst climbers, a counter culture and an establishment that weave between each other. There's also the prolific shoplifting, scrounging, grafting and hitch-hiking, behind this frontier banditry though are fierce rivalries and sniping that makes the comedy circuit look like a band of brothers.

The lengthy footnotes in the book make it a tricky read. It would have been better to weave some of them into the narrative as anecdotes and asides. But for all that it was a compelling book. It isn't a eulogy to a friend, or a hatchet job, but a careful and thoughtful portrait of a flawed genius with demons and very obvious failings. To his enormous credit, Perrin looks at many anecdotes and myths from all angles, he was earmarked for an MBE but it coincided with him fighting with police when he was knicked for drink driving. If I'm honest, I find Whillans to be a very unlikable character who hurt too many people. But they are judgements Perrin invites you to make, rather than forcing his view on you.

Could he have been a contender? Well, he was. For all of his status as "Whillans the Villain - the outsider" he had a great deal more recognition and respect than he probably wanted. The mark of a true outsider is that they place themselves there by choice.
Posted by Michael Taylor at 9:49 am