David Peace at the Football Museum 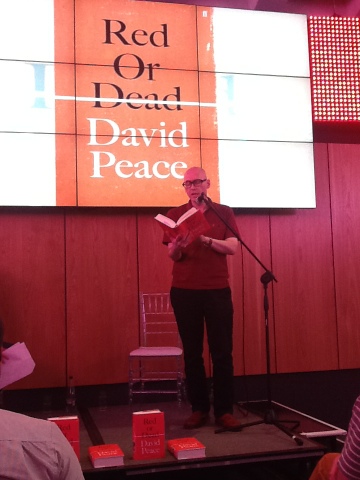 A great evening of stimulating talk tonight. Two balding guys, a stage and some stories. The stage at the museum. The National Football Museum. In Manchester. Sorry, no, I can't keep that style up for an entire blog, but David Peace does for 700 plus pages in his new fictional biopic of Bill Shankly, Red or Dead. And when he reads it out, just as I heard an actor do last Friday on Radio 4, it is mesmerising and compelling.
But at this teaser event for the Manchester Literature Festival, Dave Haslam, a smart interviewer, does a neat trick I've seen him do before. He delves effectively and disarmingly into the subject's background, then leaves obvious questions unasked, encouraging audience participation. A very knowledgeable and inquisitive audience oblige.
Peace was willing and open. I really enjoyed hearing him talk too. My two favourite novels are Cormac McCarthy's The Road and Alma Cogan by Gordon Burn. And in any top 10 is GB84 by Peace. He duly acknowledged the influence and style of both those books on his style and ambition. I'm also fascinated with how you weave in real living people into fictional stories. These points were duly teased out with some great answers from him.
In Peace's Red Riding trilogy he imagines dark depths of Yorkshire's underbelly. Yet what has Jimmy Saville's unmasking proved? That there was something worse? Or that abuse of power took many forms? Where else will he look for stories, for real lives to portray? Geoffrey Boycott was mentioned, and Brian Clough at Forest, possibly the greatest achievement in football. I think he sparkled most when he knocked around ideas about a Harold Wilson book, another Huddersfield/Liverpool connection, like Shankly.
I asked a question. It was something like this. "You have shown great bravery by taking risks in introducing real living people into these works of fiction. Did your experience with the negative reactions to Damned United affect how you approached Red or Dead?"
He said it did.
I hope I like Red or Dead, it is about a good man, Peace says, and a celebration of a good life in a harsh world. 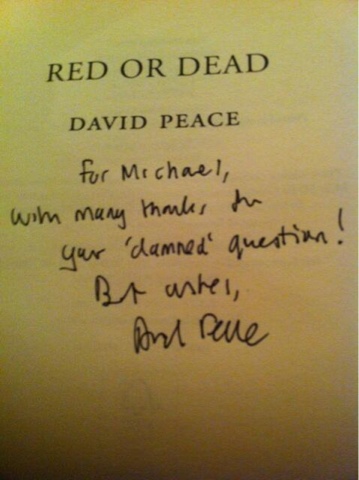