I received some really sad news this week that an old pal had passed away. Mark Wastell, pictured above, second left at Wembley in 1992, died quite suddenly. I last saw "Tonto" as we called him, at Swansea at the end of the last season. I've got loads of great memories of playing football with him, travelling to Rovers matches all over the place, including, memorably, to Lyon in 1998 for the UEFA Cup game.

Our friend Martin Cook has written a lovely obituary.

When I was at secondary school Mark was three or four years ahead of me and it was his younger brother David Wastell who was in my class. It was only when I moved down south to that London, and joined the Rovers London Branch football team, that I recognised the surname.

‘Tonto’ was the eccentric chap I had first met on the terraces at Plough Lane one midweek September evening in 1985 as Rovers were humbled into an embarrassing 5:0 defeat in the League Cup, away at plucky Wimbledon.

As one of the 2,110 official crowd that night, and arriving directly from work, Tonto was be-suited in pin-stripes and carrying a black umbrella. Over time I’ve convinced myself he was wearing a bowler hat too (but that is probably just my memory exaggerating the rather plausible caricature).

Shortly after this introduction to the Rovers London Branch I travelled to Wormwood Scrubs fields one Sunday afternoon to make my footballing debut. I was shocked to see the team didn’t have a ‘proper’ Rovers strip and those who didn’t have their own shirts wore a second-hand navy blue Scotland team cast-off. 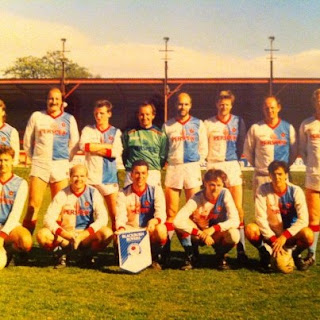 Tonto wore his old Rovers shirt with pride that day, despite it being riddled with holes, in need of a good wash and failing to comply with any FIFA regulations.

Those who didn’t know Tonto could be excused for thinking he was part of an upper-class elite from Oxford University, merely slumming it with the lumpenproletariat as part of some social experiment. He spoke the Queen’s English, he talked the talk and he introduced me to some big, accountant-speak words – I never knew a brand-new football team strip could be ‘amortized’ over a three year term (well, not as such)!

But Tonto was one of us; brought up in Blackburn, a proper Rovers fan, often distraught, sometimes delirious but nearly always there to follow the ‘world’s greatest’ as he would say often.

Despite all his later denials, he really did do a mini-breakdance routine, in front of Don Mackay, Steve Archibald, Ossie Ardiles, Colin Hendry, Howard Gayle and er…Tony Diamond in the Bishop Bonner pub, Bethnal Green, after Rovers had secured a play-off spot away at Millwall in May 1988 (4:1 away victory). We were all delirious that night.

Eventually I became player-manager of the London Branch football team from 1988 to 1991 and soon realised Tonto was one of the most reliable members of the squad. Virtually ever-present, competent around the field and a reliable stand-in goalkeeper; he even weighed-in with a few goals now and again.

We were an eclectic bunch but enjoyed three ground-breaking summer football tours; the first two to Brixham in Devon and the third to Brighton. Tonto was part of all three trips and played a blinder in goal at St James’ Park (May 1990) as we narrowly lost 3:1 to a far superior team from Exeter City supporters club.

In Brixham we had all stayed in the guest-house of a former London Branch member (Roger Snowdon) – an old friend to some of the more established team. Following some typically boisterous drinking behaviour from the younger element (of which Mrs Snowdon was most disapproving) the elders, including Tonto, John Knight and Allan Fell, retired to one of the rooms for a late night cup
of tea.

I shall always remember the incredulity that Tonto displayed when, upon the orders of his wife, Roger Snowdon burst in to ‘check the room for beer!’ Also, having been met by rather childish and muffled laughter from the elder statesmen’s tea party, they were all sent to bed for laughing about it!

Normally, what happens on tour stays on tour, but I can recall (summer 1991) Tonto happily taking part in that most vulgar of working class pursuits, the karaoke night in Brighton! His enthusiastic contribution was a very flat version of the Beatles ‘Lucy in the Sky with Diamonds’

I’m unsure of Tonto’s belief system, but if he is up there in the sky, he’s probably holding court over a pint of Thwaites best, with Noel Brotherston, Ronnie Clayton and Jack Walker and advising them on the pros and cons of equity differentials and the secured bond markets etc.

Over the years I have played football, darts, pool and cricket with Tonto and attended beer festivals, curry houses and countless Rovers matches, home and away. We were in Trelleborg for Rovers first ever adventure in European football and we have shared enigmatic tales of genuine wit and repartee, as often reported in the branch newsletter, Many Miles From Home.

Despite being tagged as an ‘International Man of Mystery’ and regarded as ‘a bit of a boffin’ (terms which I suspect he was secretly happy to be known by) above all, Tonto was a friend, a loyal Rovers fan and a true Blackburnian.

How very sad. One of the very best Rovers. Loyal, dedicated, committed to the Rover cause. But most of all he was kind, thoughtful and a decent human being. And not half a bad player. Jack will look after him

Tonto - what a great bloke and totally unique. I've got so many memories - all good. will be sadly missed. RIP mate