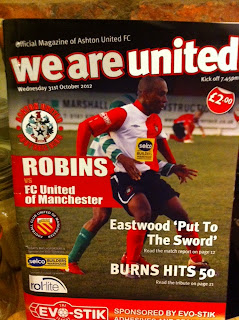 I miss going to my football club. I could just swallow my pride and start going back to Ewood Park, but I'm stubborn like that. One day I hope the Venky's will be gone, but until they do, then we won't go. To give my non-league adventures a bit of a purpose I'm going to try and chalk off the Greater Manchester grounds this season. I love the feeling of walking through the turnstiles at a new ground, sampling the atmosphere, tasting the pies, weighing up the balance of two teams of toilers at an unfamiliar standard and feeding off the crowd's knowledge of who is who.

My 134th ground was Ashton United's Hurst Cross, which had a tidy little main stand with a covered terrace opposite and open ends behind each goal. I sat in the main stand with FC United supporters around me, expressing their disappointment at certain players, especially in the second half when Ashton pegged them right back and should have wiped out the 2-0 half time deficit.

It was also the first time I'd seen the FC United rebels in action. The team play with a lot of energy and passion and don't seem to have the odd primadonna that blights most teams at this level. They were supported by hundreds of fans who sang all through the game with a fine spread of hyperbolic and colourful banners. I have to say I was a bit disappointed at their berating of Ashton players "you fat bastard" and the ubiquitous "this is a shit hole, I want to go home" that the modern funboy gobbie fans like to sing as part of the matchday 'banter'. I thought the co-operative principles of this club were above that sort of nonsense. It has to be said that the fans do give FC a lift, a desolate ground with only the home fans willing their team on may have broken the siege of the second half. You have to remember though, these fans are from a tradition of supporting the world's most arrogant football club.

Anyway, next up will be any one from Curzon Ashton, Radcliffe Borough, Ramsbottom United (steam trains too!) or Trafford. The real soul of football and not a "global advisor" to be seen.
Posted by Michael Taylor at 8:19 pm