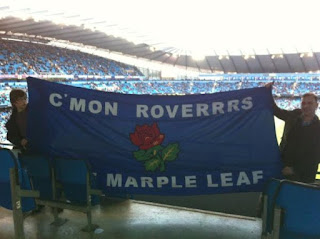 Manchester City fielded at least four players against Blackburn Rovers yesterday who cost more than Venky's paid to buy an entire club. With the exception of City keeper Joe Hart - who may as well not have bothered playing - no Rovers player cost more than the next cheapest City player.

There is a gulf in money between the clubs. There was also a gulf in class. I said to my eldest lad yesterday that the point wasn't to hope we'd win - we had no chance - but for him to watch at close quarters a player of sublime skill and ability - David Silva.

We can moan about humiliation and tactics as much as we like, but that's the truth. And whoever else buys the club, there isn't a thing we can do about it. The Man United score looks more and more like a fluke.
Posted by Michael Taylor at 4:50 pm