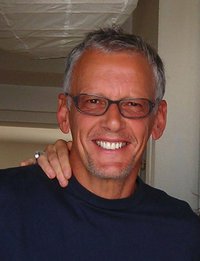 I've dabbled with Facebook and thought it wasn't for me. Being asked to "poke" young people isn't my thing really. Anyway, as I said yesterday I've piled in again. I'm glad I have for the connection to an old friend called Jon Johnson. We were mates when I lived in Western Australia in 1988-1989. He introduced me to an eclectic and bohemian crowd in a laid back city and contributed to a memorable year down under. I was thinking of him as we watched the last episode of series 3 of Mad Men last week, not for the mild Don Draper comparisons, which are real enough, but for a tangential episode with another character. Jon had a mate who followed him to London called James Martin, or so I thought. It turned out he was called something else. An engaging enough rogue, the last time I saw "James" was in Jon's flat in Holland Park as this bizarre unravelling took hold.
Another of our "crew" back in the day in Perth was an amazing character called Roy Jopson, who I shared a house with. Roy died in 2004. As I've chatted to JJ on Facebook this weekend he's recounted the detail of Roy's demise. It must have been a painful experience for Jon and other friends as they watched Roy bewildered in hospital as he reeled from brain cancer. Memories are one thing, but staying in touch with friends is much better and makes it more real.
Posted by Michael Taylor at 8:22 pm