Ten thoughts on the UEFA Cup final in Manchester 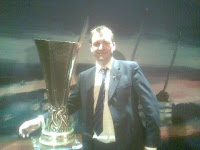 When Manchester made a bid to host the UEFA Cup, they had one idea in mind - lots of well behaved Germans and Italians, for instance. What transpired was always going to be quite different.

The estimates at the numbers of Rangers fans who were coming seemed to increase by the hour. A supporters’ spokesman simply took the highest claimed figure for Celtic fans in Seville and added 10 per cent. That would be about 150,000.

The city centre yesterday was brilliant. The Rangers fans were drunk, sure, but it was all very good natured. The stories bandying around were like this: "Just seen a guy who used to work here and he lives just on the out skirts of town and he woke up this morning to find a load of Glasgow Rangers fans camping in his front garden hahahahaha .... he said they were sat on their deck chairs and didn't want to tell them to move they scared him hahahaha."

The thrill of going to a major final, in the UEFA hospitality area was just brilliant. A real once in a lifetime experience. Walking down the red carpet with Denis Law, sitting with Trevor Francis, was just great.

The game was pretty crap, as bad a first half as I've ever seen. But what we expected. Darcheville is a fairly artless blunt instrument on his own up front. Rangers occasionally play some neat passing football, but the style is to play deep with 4 centre backs and has been effective enough, so why change? Barry Ferguson did what he always does; look busy but with a poor final ball. The spell in the first 15 minutes of the second half was the chance to score and they missed it.

The atmosphere in the stadium was electric at kick off, but went flatter quite quickly. When it picked up it was really created by the Russians. Only when they made noise did that rouse the Rangers fans.

We missed the first goal because city council officials and the editor of the MEN were stood up around us as news came through about "riots" in Piccadilly. The bother in Piccadilly Gardens, which is written about here, was caused by a screen going down. So many pissed people were BOUND to have gone mental if the screen went blank.

I'm surprised the clean up didn't go on through the night. To arrive in the city centre through Piccadilly today was a disgusting experience with the smell of stale urine hanging in the air.

The question for Manchester is this: was it worth it? I think it was.
Posted by Michael Taylor at 8:50 am

Labels: here's me with..., Manchester, Namedropping, ten thoughts on...