Miracle at St Anna - Book review in a lift 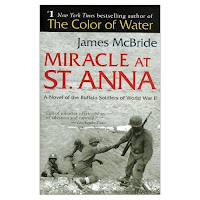 My pal Paul got me this incredible book because the story is based around the part of Italy we both know so well. It's an incredible story that throws together so many back stories of loyalty, faith, spirit, survival and racism. It's basically about four black American soldiers who get caught behind the retreating SS in late 1944 in Italy. The ragged Nazis are at their worst, the Italian population are at war with themselves, while 4 terrified GIs who are treated like crap by their white officers are fighting for their lives and that of a boy they rescue from a barn during a battle. Unsurprisingly it's being made into a film, directed by Spike Lee, which will be released later this year. There's some press about the film here.
Posted by Michael Taylor at 9:01 pm

I have also read this book and it is awesome. I cant wait for it to come out here in the states