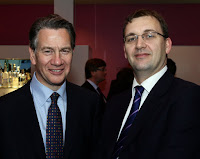 I used to support Labour in the way I support Blackburn Rovers and the Holy Church of the left foot. I don't anymore, in fact I don't support anyone in that game at all. However, the balance of power, electoral trends, devolution of power and media spin: love it, just love it, as some circus performer once said.

Last night I went to see Michael Portillo speak at a dinner at Harvey Nics in Manchester as a guest of DLA Piper. He was very good. Wise, perceptive and very self-deprecating. I'd be lying if I said that was a surprise, because he has done loads of TV that has tried to change his public image.

I too roared with drunken glee on the night of May the 1st 1997 when Stephen Twigg beat him, a moment, he told us was voted as the 4th best of the 20th century.

Here are ten thoughts from the night that have stuck in my mind.

The Tories are coming from too far behind to win, David Cameron is doing the right thing in positioning the party in the centre

Blair was a great actor with a thick skin

Brown is like John Major, he takes it all too personally

The parties are so similar, the public are bored

Linking pension rises to prices, not incomes is the scandal of the 20th century

Hilary Clinton is the most impressive candidate in the US

John McCain is a boring speaker who Portillo fell asleep listening to
Posted by Michael Taylor at 5:34 pm

Labels: here's me with..., Labour, Namedropping, Politics, ten thoughts on...