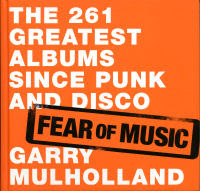 The best ever book of music lists is This is Uncool, the 500 greatest singles since punk and disco by Garry Mulholland. Great because it's so personal and so partial. It helps that the author is about my age and shares my tastes. He got more into rap than I ever did, but the rest is pretty close to what I like. It's also helped me experiment with music that passed me by at the time.

His new book Fear Of Music, the sequel of 261 albums chosen with total prejudice is now being talked about in these parts. He was roughed up on Terry Christian's BBC Manchester programme yesterday for ignoring the Stone Roses.

The full lists are here, but these are my ten favourite albums that aren't in his book, in no particular order.

But this is my truth, tell me yours?

Posted by Michael Taylor at 3:07 pm

This is hard work and also something that should only be attempted on a late Friday afternoon. Everything I come up with appears to be on the list of 261. However, here are 10 that I listen to quite regularly and that don't appear to be on the list:

I think list are great but more often than not I dislike the influence of what is now. I also think people often try to hard. Surely if all the albums were so good and so many people always list them, then why weren't they all top sellers.

Not disputing the greatness of these albums as I've got/heard many of them. It's just that it's like that Chelsea thing - everyone stood on the Shed....

It's just that there are many thirty somethings out there who have the hindsight influenced by books like this and a bit of disposable income. No one who ever creates these lists has every owned/listened to something uncool...

No-one ever would admit to SpiceWorld even though it may be close to their heart.

Jamie,
I think next week I'll do my 10 things I like that are terribly uncool. Duran Duran's Ordinary World, for example.
MT