Rubbish snacks - takes one to know one 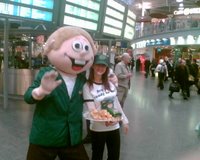 Holland's Pies are assaulting us with some kind of marketing blitz at the moment.
"We're pie-jacking rubbish snacks - Grab some proper food," they say.
This was what greeted me at Piccadilly station this morning (trains all running well, thanks).
Oh dear.
Holland's are to pies what McDonalds are to fillet steak. They have a following amongst sentimental Lancastrians who think it earns them some homespun street cred. They even suggest you eat one cold. Noooooooo! And I really don't like the fact they're now at the Rovers, either.
But sit down with a Levers' meat and potato, or a Fraser's meat, a Satterthwaites pork, an Archers steak, or a Grenaby farm potato pie and do a taste challenge with some of Hollands salty mush. There's your answer.
Rubbish snacks? - that's you that is.
Posted by Michael Taylor at 8:51 am