Danger alert - and how to make business in Manchester more interesting

Right, I've sorted the commute thing out. Trains from Marple are bit quicker, but trains from Rose Hill are empty (it's at the end of a branch line, little Thomas). Getting a seat trumps the tiniest minor inconvenience of stopping at lots of stations like Hyde, Woodley and Guide Bridge.

Arriving at Piccadilly today I was greeted by hip young things handing out leaflets. Often, these are vouchers for some trendy cafe or sarnie shop, so I make a point of taking one. They were actually for the opening of the new footbridge, which is a tidy little short cut to the office.

Here's the view back towards Piccadilly, with a few of the lads who are still polishing it. 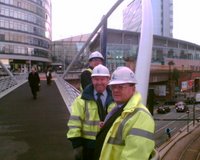 However, it's still a bit of a hazard when you get to the end of the ramp as the path seems to take you right onto a blind spot where the tram track curves towards the station. I'm sure the new piazza and the new hotel, when they are finished, will give this section more logic. But it's pretty hairy and a straw poll in the office found 100 per cent agreement. Taguey is going to a dinner to launch this tonight (he needs to eat), so we'll ask him to point this out.

This is the thing with the new Manchester. The centre of gravity is constantly changing. Clusters are emerging in unlikely places. A pal of mine is starting a new business and said his preferred location was just over the Irwell, as it's close to loads of the top finance guys in town. Fourways House, the eco-central, in the Northern Quarter is full of greeny like-minds. PR companies and design agencies abound on Jordan Street in Knott Mill. Personally, I think people should mix it up a bit more. The Mersey Basin Campaign could move into the spare floor in City Wharf, home of Ford Campbell "as imaginative as it is persistent, as assertive as it is credible", while the new Zeus Partners team could find an opening on Canal Street. They may even learn to like it.
Posted by Michael Taylor at 1:47 pm