Lunch of the month for July - a well travelled month 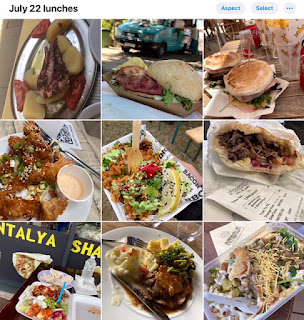 This is one of the hardest picks yet. Having been on a bit of a gastro break in Porto, the playing field isn't exactly level, so I'm going to exclude the dinners and just show a few pictures from snack lunches in the city, or at the beach.

Clockwise from the top left we have octopus and potatoes, simple backstreet Porto food, a chicken sandwich from a market stall at the south side of the Ponte de Sao Joao bridge and a juicy burger from the beach bar at the oceanside lido at Leca de Palmeiras.

Next row, left to right is some astonishingly gorgeous Kampuchean Fried Chicken from Kambuja at Stockport Produce Hall, just enough to scratch the itch and not send me into a coma for the afternoon. Next was the spiciest of them all, a firey Sri Lankan fish kottu at the Blue Dot Festival, and a lamb shwarma from the Edgeley branch of the Levenshulme Bakery. Oh my.

On the bottom row, left to right, starts with a mixed shwarma from the Antalya Shwarma in Hyde, which like Edgeley's finest kebab, is raising the bar for district kebab action. Next was a delightful roast lamb lunch I had at a country house in Sussex that I'm not really meant to talk about.

And finally. Last and not least, but best. The Samosa Chaat from Ambala sweet centre on Euston's Drummond Street. I worried HS2 would knock it down, or damage trade, but it hasn't. Lovingly made, terribly photographed, but my lunch of the month for July. Sorry it's not a Manchester winner, all of these were all awesome in their own way, but this was the best.