Why music and football matter 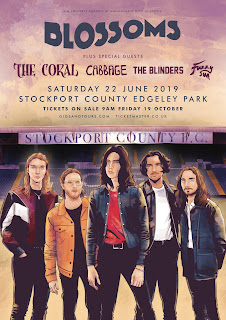 Why do some places have a good feeling about them, while others seem stuck in a cycle of decline?

I asked this in my column in the Tameside Reporter and Glossop Chronicle this week. And I was also curious as to what music, sport and culture have to do with levelling up of a place?

The government spent 350 pages of a policy report mulling over this point, before sprinkling on some nonsense about medieval Florence. I wrote about it at the time for Big Issue in the North, and frankly, if anything, I probably overstated how weak the government's commitment was to this agenda.

Yet for people at the coal face of local government, where urban regeneration and business intersect, the work goes on. For the last few months I've been immersed in this world in my work for the Leader of Stockport Council, seeing up close how committed groups of people can achieve positive change often against stacked odds.

What I'm about to say isn't civic boosterism, but it does show the importance of some key 'feel good' elements in how a town can think about the future. As I was writing for the Tameside paper I pointed out how two of the neighbouring boroughs of Tameside have suffered conflicting fortunes in recent weeks, highlighted by their football teams.

Oldham Athletic have been relegated from the English Football League and into the National League. They also suffered the ignominy of being the first club to have played in the Premier League to then drop out of the 92.

They have been torn apart by terrible owners and have developed a fractious relationship with their supporters.

Oldham has been dealt a bad hand lately. Racial tensions have come to the fore again during the local election campaign, where Arooj Shah was the latest leader to lose her seat on the Council after a concerted and highly personalised campaign against her.

I went to the launch of a review of Oldham’s local economy recently where some home truths were aired. Committed local leaders involved in the Oldham Economic Review Board were honest enough to recognise what Oldham lacked, and some of that came down to a sense of a direction. According to experts from the University of Manchester, two of the important factors in how a town feels about itself are “civic pride” and “social fabric”. The latter feeds the former.

In contrast, Stockport County have won the National League and will be replacing Latics as part of their march back to becoming a proper football club again. They have enjoyed sell-out match days, and it’s no coincidence that the club is run by a local businessman, Mark Stott, who enjoys a good relationship with the Council and the local community.

In the summer of 2019, a major concert at the Edgeley Park stadium featuring local heroes Blossoms symbolised Stockport’s self-confidence.

It has a clear identity that is comfortable with its relationship with Manchester - Brooklyn to Manchester’s Manhattan, the council leader Elise Wilson is fond of saying.

I don’t exaggerate when I say that Blossoms have been a major cultural lift for Stockport. The band and their families are even using their cultural power to invest in new ventures in the town, clothes shops, bars, salons, and supporting other bands. It’s all about wanting to put something back into the town that has contributed so much to their own identity; they’re not Blossoms from just outside Manchester, they are Blossoms from Stockport.

Manchester’s onward march as a city attracting businesses and retaining graduates is because of its own rich cultural assets. The city invested in an International Festival precisely to make it culturally attractive and known throughout the world. A rich musical history and two enormous global sporting brands add to the allure.

People cherish things that they have lost in the communities, and can't always understand why they've gone. A flourishing town centre is one, pubs, workplaces, theatres and sports clubs are examples of others. By the way, as well as sporting and musical assets, one of the other things that make people feel good about a place is lively independent media.

For what it's worth, the evidence from what I've seen in my recent deployment in Stockport, and from what I know of the people behind the deep thinking in Oldham, they are making steps in the right direction. But it is against a backdrop of precarious funding, disinformation, government drift and disruptions to local leadership. It's never been more important to hold places together as we step into an uncertain future.

Posted by Marpleleaf at 8:36 am