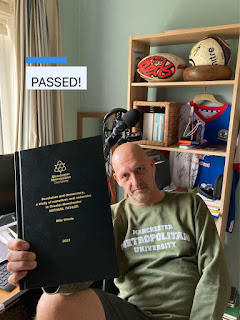 So I passed my MSc!

If you want to view it, it's here.

I'm genuinely really pleased with the end result, and honestly think it has something different to say. As I outlined here, much current political science doesn't get what's truly different about Mayoral Combined Authorities, nor do political commentators understand Andy Burnham.

It wasn’t a smooth ride, it got sent back by the examiners last year for being “descriptive” and “journalistic” amongst other critiques. I was defeated initially but on a stern climb up Skiddaw the advice of good friends was that the only person to blame, and who could do anything to make it better, was me.

The "journalistic" barb hurt the most of all, because that's literally my identity. I felt a snobbery from academia towards people who are good storytellers, but it also woke me up a bit and sharpened the writing. I didn't compromise on what I hope was clear writing, but I did show a little more respect to the political scientists who I sought to walk alongside.

Another difference between journalism and academic research is the requirement to anonymise interview sources, which also means I can't thank them by name. However, I can say that Andy Burnham’s model of running the Greater Manchester Combined Authority is something unique and worthy of further study (and compared to Whitehall and Holyrood is remarkably accessible).

So I must thank Dr Rory Shand and Dr David Beel for supervising me and helping me to weave a golden thread throughout, Professor Jean-Noël Ezingeard for encouraging me to do it in the first place, and Michael Stephenson for supporting me to finish it with a flourish.

I was originally inspired to do this by Dr Jon Davis, Dr Michelle Clement and Dr Jack Brown and their dynamic approach to ultra-contemporary political history at The Strand Group at King's College London. They have a brilliant network throughout Whitehall that is led by their taught course on the workings of government. I'm slightly disappointed I'm not around to build something around our devolved politics, but I'm sure others will pursue that path, maybe my good friend and mentor Professor Andy Westwood at the University of Manchester.

If anything, the whole exercise proved to be a very useful exercise in better understanding communications and brand strategy. And journalism.

* I enquired as to whether I could get a distinction, a merit, or a star. But you can't, you just pass, or you don't.

Posted by Marpleleaf at 8:32 am