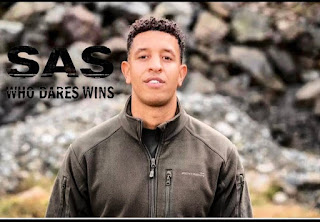 My guilty pleasure on TV at the moment is SAS Who Dares Wins on Channel 4. I watch it on catch-up as it clashes with our radio show.

The added ingredient this year is that we know one of the contestants. Sean Sherwood was a teacher at Harrytown when our lads went there and when I was a Governor. He was absolutely great with them and they all have very happy memories of their time with him. Max and Louis in particular were part of the team that won the Stockport Schools football cup in 2015 that Sean coached. It was, he has said, his greatest achievement in education and something all of the lads recognise was done against all the odds. I remember watching the game in abject disbelief, fully expecting a plucky defeat, but they found a sense of belief and courage that surprised everyone. That proved to me that their coach had a fundamental winning mentality. So to see him on this gruelling stage fills me with admiration and expectation. Obviously it's going to be hard to win, but we're four weeks in out of six and he's right in the mix. So yes, it won't surprise me in the slightest that he'll win.