Across an Angry Sea - the SAS in the Falklands War

I used to do short book reviews based on doing a pithy description in the time it took to ride eight floors in a lift. It was based on a journey I did every day for 11 years, often with a book in my hand, and often accompanied by a colleague who'd ask, what's that about?

The modern equivalent is a passing Teams or Zoom call. Enough time that they can still concentrate, and not too much of a monologue that I'll lose my train of thought. 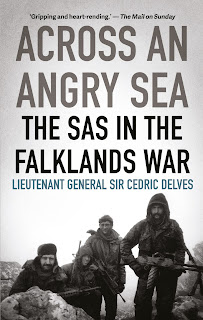 I thought this today when discussing recent cultural consumptions. I mentioned that I'd read a book about the SAS in the Falklands War of 1982 and though I didn't get an eyeroll, I definitely picked up enough of a scent to say in reply - it's not what you think. It really isn't like something from that macho confessional that did so well a couple of decades ago. Cedric Delves is incredibly thoughtful, deeply respectful and a very, very good writer. It does cover the historical narrative of the Falklands War, but it isn't a history of that conflict.

I found three things about it particularly enthralling.

One, the terrain of the Falklands and absolutely dreadful weather conditions they constantly battled and the conversations they had about this new invention called Gore-tex.

Two, the morality of war. There was a clear sense that this was a right and just endeavour. But in executing it there is total respect for the lives of other soldiers, especially of the enemy. This was probably the last war our forces have fought under something like civilised rules of engagement. Geneva convention, terms of surrender, prisoners, etc. All the close encounters with actual Argentines are fascinating.

Three, the humility of the SAS. I know that sounds totally counter intuitive, but they are not as portrayed in shoot em up action films and by Lewis Collins and Ant Middleton. We hear a lot about command management and military discipline, but Delves' descriptions of tactical consensus building was genuinely eye opening. I also learnt the difference between material and materiel.

OK, we've been stuck on the landing for a couple of minutes while I did my three things, but this was a great book.

Posted by Michael Taylor at 9:38 pm