Our politics, my take and where we go from here 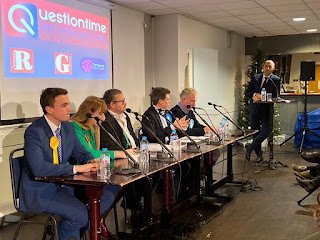 I didn't take part in the 2019 General Election, except to host a series of hustings for Quest Media Group in their circulation areas of High Peak, Ashton and Stalybridge & Hyde. It also seems like I haven't taken part in this blog much either, which is neglectful.

There are a few reasons for that; I've got a lot on. But there's also plenty of opinion out there, so I'm not making a priority of pitching hot takes and ready made opinions into a crowded market. However, a few common themes keep emerging in meetings and snatched conversations though that could do with a wider consideration.

So, here are a few longer pieces I want to write:

Me and politics - I started the year pledging to work hard to build a new political movement, getting selected to stand in an election, campaigning and sticking with it for a while. I ended the year totally disengaged. What happened?

The sheer scale of Labour's defeat hasn't sunk in with the members - I've heard it said that the Labour period of reflection will be based on suffering four straight election defeats. I disagree. Most of the Labour selectorate don't think like that. They weren't around for 2010 and 2015, they think they won in 2017 and the 2019 defeat was only because of the media and Brexit. One more heave should do it. Glen O'Hara nails it all in his long read here.

Find and Replace "industrial+strategy" - The nature and character of this Conservative government is still widely misunderstood. I'm not even convinced that they'll 'get Brexit done' to the satisfaction of Nigel Farage and the ERG.

The cunning genius theory - what's all the fuss about Dominic Cummings?

Evil conspiracy theory - how do the left think? Who is rigging the rigged system? Why are bad things happening? Who are "the few"? And why this is a really big problem.

Electoral reform, if only the rules had been different - The Tories wouldn't be in power if the electoral system had been proportional representation by national vote share. Yes, and Manchester United would have beaten Liverpool if shots over the bar counted as three points as they do in rugby. It's also highly unlikely ever to be ceded by a government elected on first past the post.

The nature and character of this Conservative government - I can't say it enough, but this is a new government in every conceivable way.

The limits and opportunities of Metro Mayors and devolution - I'm literally writing a thesis on this, so yes, it's on my mind.

Optimism and a positive view of the future - the Tories had one, none of the others did, maybe the SNP? - guess what, it works. How do the rest of us build this?

Posted by Michael Taylor at 9:32 am