The Great Escape of Marple 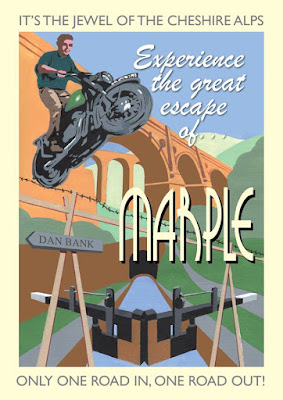 These local posters are the handiwork of my old pal and neighbour Eric Jackson, once of the Manchester Evening News and the creative force behind Statement Artworks.

We have a few 1930s art deco railway posters around the house. It's a style from the golden age of railway advertising, rather than the railways themselves, and Eric has cleverly borrowed from that style.

So many localised artefacts are twee and boosterish, but I love how these tread that thin line between a smidgen of pride and self deprecating northern humour, something very dry and very Eric. Northernticity, as Dave Haslam calls it. 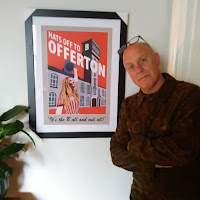 He's been telling me for a while that there was a Marple one in the pipeline. I wondered what local characteristics it could come up with. I think the allusion to the traffic is genius and the typography a great twist. The Offerton poster is great too, drawing a landmark with a gentle overstatement of the place in anyone's heart.

Take a look at Eric's website for one for your area, I love how he's not tried to be in any way tactful for Wilmslow, Alderley and Hale. There's an assumption, I suspect, that there aren't markets in irony to be found in Cheshire's golden triangle.

Posted by Marpleleaf at 4:16 pm