What’s the story - televised glory? Magic Dack and a ready made Villain 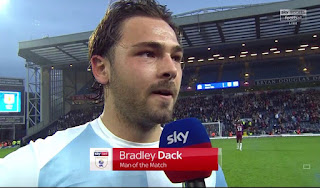 If you want to know the way that television influences games, then it was there tonight at Ewood Park in flashing LED lighting, flashing as obviously and ostentatiously as adverts for bookies, vapers and the Venky’s.

It was always going to be about Dack versus Grealish whether the game turned out that way or not.

For the most part it didn’t. The referee protected the pound shop Ronaldo like a precious newly born pup. Giving him soft free-kicks and refusing to book him for the kind of gamesmanship that clipped Corry Evans’ wings with a yellow card minutes earlier. By the time he fell like a rag doll from a nothing challenge from Harrison Reed, earning the free kick, he shouldn’t have been on the pitch if the referee had applied the same standards of footballing justice he had dispensed to others.

You can’t tell me that the referee wasn’t showboating for the cameras. In his mind was how this would play to Sky’s pre-scripted narrative. Grealish is one of those players for whom an occasion like this has to pivot on his contribution to it. Except it wasn’t at all, not even close. And then there was that cheap free-kick he won. Though to be fair, the lad that curled it into the bottom left deserves some credit for a strike of such quality.

On a long list of things that frequently irritate me about a day out at Ewood is the choice of Peter Jackson the Jeweller Man of the Match, which is usually wrong. It wasn’t the player I’d have chosen, but then I don’t get invited as a guest of said jeweller. It wasn’t Charlie Mulgrew, Ryan Nyambe, Elliot Bennett or Danny Graham. Or one of the two players who were substituted who did such a good job of souring Sky’s script and snuffling out Grealish. No, of course it wasn’t. It was Bradley Dack. It was always going to be Bradley Dack, because he scored what they call in the trade “a Sky goal” and because he’s Bradley Dack. Don’t get me wrong, I love the Medway Messi. I thought his goal was a work of unbridled genius that deserved to win us the game. But what do I know?

So we get home, way past 9pm, after dropping the eldest at his university digs, the bitter disappointment dissipated somewhat by our usual way of dealing with it, swearing a lot and playing music. Yet Sky are telling everyone who wasn’t there that the story of the night was the one they always wanted it to be.

I’d have been happy with a draw today as Aston Villa are a team with decent players in it. Whether they are a decent team is Steve Bruce’s problem, not ours. Our frustrations are another late equaliser, and some odd substitutions. Notably the bizarre introduction of Ben Brereton, a non-tackling striker in a wingers position. But I was confused by the lack of courage from Bell and Armstrong in attacking either empty spaces or an ageing full back. They might not face as experienced an opponent as Alan Hutton this season, but they will face faster ones and when they do they will look on tonight as an opportunity missed.

To end on a positive. Charlie Mulgrew was commanding and composed tonight. Ryan Nyambe gets better every game. Lenihan lives dangerously, but what a warrior. And yes, Dack is immense, but the story the Rovers fans have been stewing on all week has been the poor form of Richie Smallwood. He answered that in the best way possible tonight with a performance of bravery and some astute passing. Harrison Reed was impressive, and is a good problem for the manager to have, but the King (of Ewood) isn’t dead yet.