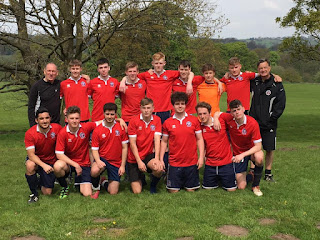 It was Joe's last ever competitive match for Marple Athletic on Sunday. The lads will be dispersing to university, world travel and faraway jobs this summer. So that's it. The final.

But what a journey it has been over the years; tournaments and trophies, tantrums and tears - and that's just the parents.

The team on Sunday included seven players who were involved in the very first season in 2006 when they were just 6 years old.

In the times I've been involved, there's always been a voice in the back of my head whispering - "who's it for?". It started with Jim White's excellent book - You'll Win Nothing With Kids, fathers, sons and football - which I reviewed on this blog in 2008. Routinely, before every game, I've said to my son, "Joe, remember what you need to do today. Enjoy yourself." After a while, I didn't need to say it, but we did it anyway, like one of those private family jokes.

I did jump for joy at times and probably over-celebrated on other occasions. I also felt their pain when they lost. But as much as I am totally convinced I'm absolutely not living my frustrated football dreams through my son, I will concede that watching this team is one of those rare occasions where I truly live in the moment and as a consequence feel a particular type of happy. As I walked off Brabyn's Park on Sunday it hit me that this would be the last time I'll ever do this. The very last time I'll ever be in that place of contentment, of belonging. Maybe it's also because in all the years I've watched Joe play I have never once come away thinking he's let himself down. It's a public and open arena for an expression of his developing character and a certain set of virtues which are expressed through how he plays. I see these characteristics in other ways, but maybe none so routinely and where they impact on others so publicly. And we passed the point long ago where this was any kind of displacement. Joe is a far, far better footballer than I ever was. That isn't just the blinkered parent speaking, by the way, it's something to do with the whole way these lads have been brought up and the expectations they have of themselves.

As our twin lads have stepped into refereeing I've witnessed again what I call "PlayStation managers" who scream from the touchline and move the players around the pitch vicariously. What has happened with these lads, as they showed in their final game, coming back from a goal down to win 4-2 against a decent Weston Rangers team, is that ability to make their own decisions. They just seem to know what to do. They can be tricky when they need to be, they look after each other on the pitch and they know how to win games of football.

I will always owe a massive thanks to the managers who've coached, cajoled and inspired my son and all the boys in this team, from those days to today - Padraig Walsh, Jason Isaacs and in the early days, Clive Breed. As Clive said over the weekend, if these lads apply themselves to their careers in the same way, then they'll do just fine. So I know who this has been for. It's been for the kids. For them as they are and for their future selves. It's always been for them.
Posted by Michael Taylor at 1:15 pm