When Mark Guterman called about his appearance in 40 by 40 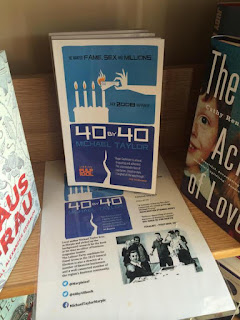 I got a call at the back end of last year from a businessman who I included by name in my 2015 novel 40 by 40. I don't know Mark Guterman well, but met him a few times, through various friends, when he was the owner of Wrexham Football Club. That experience didn't end well for him, or the club. The point of including him was as a warning to the central character about the risks of buying a football club and the fans coming after you if it goes wrong.

Mr Guterman's polite enquiry seemed to be about how a work of fiction can include real people. He also wanted to put me right on his ownership of Wrexham and how it was represented in the book. I explained that what was always important to me was to capture accurately the time and the place - Cheshire 2008. It's not pivotal to the story, but it includes a reference to "the boys" who piled in to join his investment consortium to buy Wrexham. I heard this quite a few times myself at the time. The truth was, Mr Guterman stressed, there were no boys. He did it all by himself, but with some involvement from another investor who he fell out with, Alex Hamilton. There was no consortium and no deal done at the bar of the Stag's Head in Great Warford or after a round at the Mere Golf and Country Club.

My argument, which stands, is that the book wasn't inaccurate. The purpose wasn't to report accurately on every deal that got done and who was involved, but to reflect the myths and bravado of the time too. As Tony Wilson used to say, "faced with the choice between the truth and the legend, always print the legend."

Out of the blue I've had a few more calls and reviews about the book recently. No literary agent has called begging to sign me up, no producers asking for the rights to adapt it for TV, or Hollywood, or a major publisher offering me a mega-deal on the follow-up. Just readers who enjoyed it, who liked the story and more than anything, the linkage between the real world and the one I invented.