We might want Venky's out, but how? And what next? 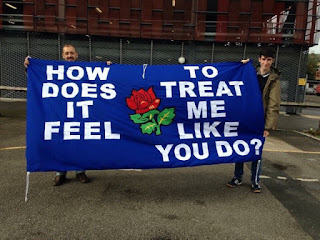 Blackburn Rovers fans have been protesting against their absentee owners for nearly 6 years. What does our experience of decline tell us about the prospects for football’s protesting fans?
We’ve tried chickens on the pitch. We’ve had marches, banners, protests, letters to MPs, questions in parliament and calls to Robbie Savage. I'm rather proud of my effort that doubles up as a tribute to a band close to the hearts of many Rovers fans. But none of it has worked. The debt has piled up as quickly as the club has fallen down the leagues.
The owners box at the front of the Jack Walker Stand lies empty and unused, yet Blackburn Rovers is still a wholly owned subsidiary of a mysterious company called Venky’s London PLC, an offshoot of Venkateshwara Hatcheries of Pune, India.
But not only have we lost 30 odd league places, we’ve also tumbled in the sympathy stakes with other fans. The highly personalised “Steve Kean Out” focus of the last wave of protests in 2011/2012 enabled the manager to position himself as a hapless victim of mob rule. The anger and the vitriol gave uber-agent Jerome Anderson – who I blame for all of this -  the confidence to stick his brass neck out and appear on Sky Sports News. Sitting with his chums (and clients) he was able to allege that “certain groups” don’t want the Venky’s to own Blackburn “for whatever reason”. It was a disgusting implication that we’re basically a bunch of racists being whipped up by the local branch of the EDL, but he was reinforcing a firmly held view we’d helped create.
I stopped going for a bit, others fell out amongst themselves. Many haven’t returned and whether it was a boycott or just lethargy, a League Cup tie v Crewe saw a crowd of 3,000. Crowds of less than 10,000 for league games won’t be far off as the team struggles to chalk up a first win. Of those that remain, the anger is back.
So what do we do now? Bottom of the league. A crap manager who looks out of his depth and talks a good line in cheery Glaswegian bullshit, a rag bag of a team of loan signings, journeymen and kids. It sounds like 2012 all over again, except we’re bottom of the second division this time.
The truth is, there aren’t any easy answers once you get past the war cry of “We want Venky’s Out”.
The problem is this is the age of the easy answer. From Jeremy Corbyn to UKIP, from Donald Trump to the Occupy movement, there is always an outlet for protest and forever an enemy to blame. It is also the age of the instant answer. Want to campaign about something? Sign a petition, join a political party, vote in a referendum and make your point. The day of reckoning comes when things don’t change. When poverty isn’t made history, when control isn’t taken back and we find out that actually, Jez just can’t. Then what?
Usually it is time and apathy that kills a campaign. People get fed up turning up when nothing changes. A march, a rally, followed by a rainy day and a splintering of interest. Not least the shrewd ability of the powerful to splinter protests by granting minor concessions and buying that other precious commodity, time. Then there’s the capacity for groups to fall out amongst themselves when they don’t get what they want.
Activism, or its on-line version, clicktivism, has as many challenges as it does limitations. It’s possible to accelerate the early momentum, but equally to exaggerate and simplify the wide range of opinions, views, egos and basic human weaknesses.
Here’s our problem at Blackburn Rovers. Our owners are just like many others in the top two divisions of English football. Overseas foreign tycoons with their trophy asset of an English football club (Chinese investment in foreign football clubs this year stands at $2billion). But our particular curse was this – we got owners who were poorly advised, stubborn and have now effectively disappeared. I’ve picked through their annual accounts and they don’t even refer to the fact they own an English football club, let alone one that’s cost them and their shareholders a ton of money. All reasonable efforts to engage with them, to assist in an orderly exit, have come to nothing.
We can do what Charlton and Blackpool fans did last season – tennis balls, sit down protests and lots of noise – but look where it got them. Same owners, same trajectory.
Saving face is apparently an important part of the Indian character. For the life of me the only way forward I can think of is to politely embarrass them in their own back yard. Keep up the pressure on the board at the home games, in case one of them turns up or has someone pass a message on. Humiliate them, expose them, but give them no space to plead the moral high ground. But to do that we probably have to take the fight to India. We’ll have to orchestrate our own protests in their home city, at the cricket when England play in Pune in January, protest outside their places of business, lobby the Indian stock exchange and make the case for their utter incompetence wherever their reputation can be damaged.
And then what? Who would buy all that debt? Who is the debt to? Who's going to make payroll every month? What would happen to a club in administration? How far would we have to fall before we could begin to build a club worthy of our past? I’ll tell you what, I’m terrified of the future under any scenario, but the present status quo is simply unsustainable.
Any help, any suggestions, gratefully received.

(Originally published in STAND fanzine).
Posted by Michael Taylor at 8:24 am

Michael - as per usual, you highlight the key issues clearly & succinctly.
With regard to the final question; for what worth I am fully reconciled to accepting administration, liquidation & therefore effectively, a Phoenix club rising debt-free, but with seriously restructured expectations, in non-league football.
Moving from one set of wealthy, foreign "benefactors" to another is ultimately futile. The club needs to be community-owned to have a sustainable future. That version of the future will in all probability, support only modest working capital. That means a shift in expectations that will be unpalatable to many; quite possibly the majority, of Rovers' fans; especially the younger generation brought up on a Premier League diet.
This "death of a thousand cuts" existence is purgatory. Venky's Out; the sooner the better, accept the pain, start again, unite behind a fresh vision, a club of the people, for the people, owned by the people.
Here endeth the rant... :o)