The second Marple Spring? High hopes for the Neighbourhood Plan. 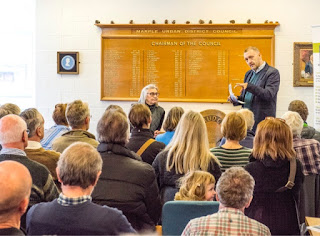 Whenever I hear talk of a new politics, a more inclusive democracy or the wider participation of the public in decision making, I visualise Marple. Not because I can't see beyond the place I've called home for the last decade, but because it's almost a living social laboratory for a practical way of delivering what is in effect a theory of community and social organisation.

Over the last few weeks a keen group has built on years of careful thinking to lay the foundations of a Neighbourhood Plan for Marple and I've been delighted to play my own part by chairing the meetings with community organisations and an open and packed public meeting at Marple Library.

I genuinely haven't formed a firm view on where this is heading, though I support the moves towards a Neighbourhood Plan in principle. Here then are some thoughts on whether this can work or not. Many of which I shared at the public meeting as provocations.

1. The Devo crux. Devolution to a Greater Manchester level provides an acute challenge to communities such as Marple. The targets for new homes won't be met just by building on former industrial brownfield sites. Embedded in these agreements is control over where house building takes place. It's important houses are built, the issue is where. Not many parts of GM have the Green belt which developers covet and where communities misunderstand how to build a cases to protect it.

2. A NIMBYs charter. There will have been people interested in the Plan who want to stop any house building at all. Either to raise their own house prices, or just because they want to preserve what they think Marple is. I'll be blunt. That can't happen. It isn't a matter of if, but where.

3. The boundary. The Plan covers the centre of Marple, but stops short of including Strines, High Lane, Marple Bridge, Compstall and Mellor. If not more houses in Marple, then the fields between Hawk Green and High Lane and all along the Windlehurst bends could be built up like Bosden Farm has been, effectively as an infill between Offerton and Hazel Grove. Wherever you draw the line, the risk increases that you create the blockages in one place, only to make it someone else's problem.

4. Town Teams and Business Improvement Districts. For me, this is a continuation of the Marple Spring of 2012, when Asda and the College sneaked a plan through, the public rose up and beat it back. Noticably absent from this has been the groups of local businesses who clubbed together then. That could and should happen again, this has to be a wider vision for Marple and what kind of place it can be.

5. Planning is about more than building and houses. Services, schools, nurseries, transport and creating an environment where ideas and businesses flourish in a sustainable way. Planning gain can accrue real social dividends out of the deals that developers will have to strike.

6. Local democracy is dying. I could point to plenty of councillors on Stockport Metropolitan Borough Council, and therefore probably on every other local authority in the country, who are virtually unemployable in the real world. The money they earn isn't great, but it is enough to support the very time servers you would prefer not to be involved. Many effective local authorities are run by all-powerful officials. There's a veneer of accountability and scrutiny, but skilled professionals in local government can run rings around elected members. In turn their own power is waning, despite devolution, their tax base is minuscule and the budgets to deliver what services they have are repeatedly cut to the bone.

7. ...But it's still democratic. There was an audible burst of approval during the meetings at any expression of dislike or disapproval for councillors and the council. The anti-politics mood has long been a feature of Marple life. Beware of what you wish for. Unelected committees of 21, however well-intentioned, are still part of the other. You join it and you become the hated "they". It is a one-way ticket to unpopularity and lacks the safeguards to call it to account. As G K Chesterton wrote: "I've searched all the parks in all the cities and found no statues of committees." Ultimately it needs a local electoral element to keep a check and balance.

8. It's not about a mass movement either. Ever since Manchester University student union elections in 1986 when an anarchist student pulled me on my dogmatic use of terms like "rank and file" and "mass movement" I've rather bristled at political dog whistle cliches. Now they appear to be back in vogue, replacing electoral politics with what Stella Creasy called "meetings and moralising" where self-appointed campaigns claim to speak for the people. Yet it remains a truism that in every council ward in every corner of England there are still about 100 people who provide the social and organisational glue to make things happen.

9. The death of politics and the birth of iDemocracy. I enjoyed Douglas Carswell's book about how open source politics is changing how the public interact with government, but if anything the recent events have proved another old maxim, power is ultimately wielded by people who are prepared to turn up to stuff. Petitions and social media campaigns create an expectation that your viewpoint means something and will make a difference. It won't, unless it is in alignment with sufficient numbers of others who feel the same way. People who don't get their way will say they are excluded. Others will seek a hearing and a voice, as of right. But they still ultimately won't get what they think they want. That's what rule by the majority does.

10. Communications will be everything. In the olden days, putting a notice in the local paper was an extension of the Town Cryer announcing news. Now of course we have local web sites. Sadly, this won't cut it any more either. Neither will a reliance on social media, a website, or posters. A sustained, multi-channel, relentless and tireless drumbeat of messages across every route and via that most trusted of channels - people talking to one another about what matters to them - will be key. And that's the clincher. It has to matter enough to people to ensure they do that.