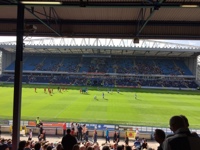 That'll do. With 45 minutes on the clock, Blackburn Rovers having squandered easy chances, made mistakes and failed to make possession count, I turned to my Dad and said, "If they don't score from this corner they'll get booed off, Bowyer will panic and this could get ugly."
Rhodes scored.
The second half was a different game. We were confident, attack minded and never looked like the hesitant shambles that so frequently chucked away a lead like this. Even when we were wasting shooting chances, including a ludicrous 4 on 2 break that their only effective player (the keeper) prevented a certain goal. Even then the result shouldn't and wasn't in doubt. But, ever the cynic, I said to my Dad as it looked like a sub was coming on, that he'd take off a striker and stick Williamson in front of the back four. Instead young loanee Tom Lawrence made an immediate impact.
Rhodes scored.
Then Lawrence scored. Another one who knows where the net is. Bang.
We need to kick on from this.
We've got season tickets this term. Good view, half way line in the Riverside stand, near a few mates, including the lad who first brought me to Ewood in September 1977 v Orient. So much to thank him for.
Man of the match: Ben Marshall.
Posted by Michael Taylor at 6:06 pm