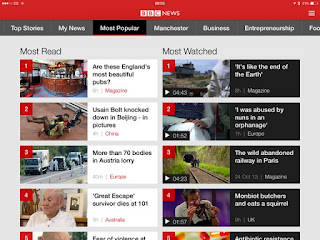 There's good news and bad news from the Labour leadership election. Personally, I think it's 99% bad news. The sliver of light through the door however is that the public don't care and they aren't watching. Supporters of Jeremy Corbyn can kid themselves that there is mania for the Jez We Can movement, but it is a tiny minority pursuit.
Trust me, I have been watching the BBC News "Most Popular" stories all summer. Not the BBC News editorial priorities, not what Newsnight or Channel 4 News thinks should top the running order that night, but what the actual public are reading and watching on the UK's most popular source of trusted news.

It isn't dumbed down either, it's a mixture of the things that interest people - war, death, sport, immigration and how to make your life a little bit better.

I say that's good news, because all the utter crapness of the Labour Party bickering and being hideously out of touch is happening out of plain sight.

It isn't a surprise to me. To people inside politics it is hugely interesting and intruiging. To most of the population it just isn't. The window of opportunity opens very briefly and closes shut again.

I had a call the other day from a guy I know who runs one of the most successful businesses in the North of England. This is a man who needs to be in tune with the public mood. We don't really talk politics, to be honest, but he was polite enough to ask me how I was about "it all". I could tell he couldn't even name a single candidate. It's not important or interesting or relevant. It will be at election time, but it simply isn't now.

There will be a rocky road ahead. Labour may well turn into Podemos, the leftish party in Spain that appeared from nowhere. We may well be transformed by a new army of activists that quickly redefines who we are.

Either way, when that window opens again we have to be relevant. Thankfully at our moment of utter irrelevance, no-one is watching.

Posted by Michael Taylor at 8:25 am