Back to the Eighties with Chelsea 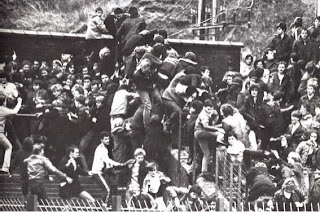 The revulsion and shock at the antics of Chelsea's throwback mob on the Paris Metro proves one thing: we've come a long, long way. But it has brought back some horrific memories of their fans and what it was like going to football when I was a lad.

In the 80s Chelsea were horrible. I saw what looked like the entire away end do Nazi salutes and chant at one of their own black players, Paul Cannoville, when he came on as a sub at the last game of the 1981/82 season.

After the 82 game I watched from the top deck of a double decker bus as a mob of them in green flight jackets and big boots terrorised Bolton Road in Blackburn. One sight that will chill me forever was a black Rovers fan being pursued with particular zeal. He was on his own and there were that many after him, screaming the kinds of hateful words the killers of Stephen Lawrence said, that I thought he'd die. He didn't, as I still see him at Rovers games now.

A few months later they battered everyone in sight on the Blackburn End (above) in a grotesque example of "end taking". The uniform had switched to golfer chic by then and terrified Rovers fans scrambled over barbed wire fences to get away from a mob dressed like Ronnie Corbett.

There's tales of growing up in the North aplenty in the book I published a couple of years ago, Northern Monkeys, an anthology about the evolution of northern working class fashion. We skirted around the right wing element of the casual movement and dropped a chapter from a National Front supporter (since reformed) and Blackpool fan (unreformed, I suspect). Apart from Leeds, it was never an overtly racist scene.

But the Nazi thing was what gave Chelsea a particular chilling edge. My brother-in-law is featured in Colin Ward's book Steaming In where he met the Chelsea mob at an England away game in Istanbul in 1984. The author highlights the bafflement of the "Blackburn lads" (he's actually Blackpool) at how the real hardcore refused to acknowledge goals by black players and were openly and proudly racist. That was the way they liked it.

But that was then and this is now. I'm one of the first to snigger at the atmosphere at Chelsea, the "golf clap" that greets a goal and all those corporate fans. I'm not sure these are good times for football, but they are better times in this respect, that's for sure.

The question has been asked whether those racist days are coming back? No, but if you'll excuse the pun, it hasn't gone away, it's just gone underground.