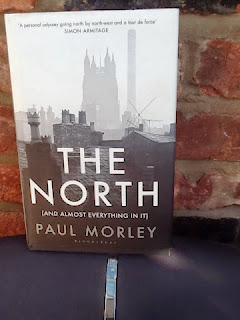 Laurence Sterne's Tristram Shandy is a complex, tangential and often confusing book. Not only did it subvert a new form of literature before it had even really taken off - the modern novel - it has served to provide a new set a particular challenges for modern interpreters of other literary forms; the modern novel as the basis for a filmic treatment, or for a stage play. Many said it couldn't be done, so that a version of it became Cock and Bull, the Life of Tristram Shandy, adapted by Frank Cottrell Boyce, who then disowned this film within a film, which in turn became the basis for Steve Coogan and Rob Brydon's The Trip, featured Tony Wilson playing himself, confronting Coogan as if he were Partridge. The only thing missing was Tristram Shandy, a gentleman, propelling into the immediate present, a narrative that speaks for the past and the future.

This has everything and nothing to do with Paul Morley's The North. Pause for a moment if you will and think about what I did there. I'd like to think I don't usually write in such confusing riddles. I would imagine if I were writing a book about the North I would do just that. I would talk to people all over the North, gather their recollections, piece together a narrative based on conflicting yet coherent streams. I may, in my limited way, project some of my experiences in a narrow sphere of my life. Maybe, say, my obsessions with male street fashions and teen cults. I could call it, at a push The North. I may even dwell with an unnecessary and unreliable memory on stories about bus routes around Lancaster. In order to make up for the fact I couldn't be arsed to get on a train to Newcastle, Harrogate, Carlisle, Barrow and Preston I'd pepper the text with cut and paste jobs from Wikipedia and a few facts you could otherwise pick up from hours scouring the internet. People may even like stories about Wittgenstein and Anthony Burgess in Manchester, or that karaoke was invented in Goyt Mill in Marple, or the time I met Dave Lee Travis on holiday in Italy. Or that my Dad moved around a lot when he was a lad. But I wouldn't do that. I'd get the name of Liverpool's manager right though. It wasn't Bob Shankly, you numpty. It was Bob Paisley.

I'm not a contemporary book reviewer, I got this for my birthday last July and it's been on my reading pile for ages. If you want to read a generous review, go and look up one by everyone's favourite cultural theorist Terry Eagleton.

In the end, even trying to review this mess of a book is making me irritable and tetchy. It has genuine, genuine gems. But it is not really about the North at all. It's a series of tangents, a product of a distracted mind, or someone able to frustrate and manipulate his publishers despite not delivering his much promised biopic on Anthony Wilson.

It also defiantly and arrogantly doffs a flat cap in the direction of Tristram Shandy with the rambling disconnections and the stubborn refusal to be what the author claimed he wanted the book to be in his original submission, which he even includes as a form of showing off. It takes brass balls to do that, or a brass neck. And we all know what's there where there's brass.

Posted by Michael Taylor at 7:37 pm

It's Bill Shankly, not Bob Paisley.

It was six years ago, but I think that *may* have been the joke. I've just checked the book and he was definitely referring to the time Bill Shankly was Liverpool manager and I totally knew that. *smiley face*