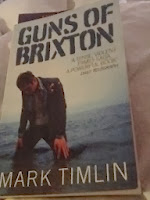 Through the 90s I devoured crime fiction, falling particularly for an American writer called James Crumley and a South London hard boiled voyeur of London's underbelly by the name of Mark Timlin.

Even before his Nick Sharman private eye novels were made into an ITV drama with Clive Owen, they had something characterful and true about them. I liked the sense of humour and naughtiness of them - name dropping TV series Sharman watched like Magic Rabbits and Invitation to Love - both series-within-series on Brookside and Twin Peaks respectively, he also hat tipped Crumley, which I thought was a nice touch. Timlin also had a delicious way of describing food, sex and clothes, something that is easy to get so wrong.

I stumbled upon Guns of Brixton recently having been bitten again by the crime genre bug thanks to a Val McDermid event at the Manchester. Literature Festival and from reading Kevin Sampson's expansive Scouse gang epic The Killing Pool.  What, I wondered had become of Timlin? Like all his previous books Guns of Brixton it is named after a song title. It turns out it was originally published as Answers From the Grave in 2004.

It is full of the familiar observational social nuances that Timlin has always been good at. By spanning generations, like Kevin Sampson's tome, the changing nature of London criminal activity and morality provides a constant backdrop as well as his trademark bloodbaths and a cameo from Nick Sharman.

But, and there is a but coming; much as I enjoyed it, and sat up late one night to finish it, I felt it lacked polish. All the ingredients are there, it just needed an edit, someone to push a funny, deep and powerful writer to be better. A couple of silly errors towards the end, confusion about which character was speaking when and a lack of impact about a couple of plot twists. All that said, I've also knocked off John Grisham's latest, The Racketeer, this week. Formulaic, no character depth, but slick as you like. I'd have hated Timlin to have become like that, but Grisham doesn't half have pace and polish.

I hope there's more from Mark Timlin. I'm going to enjoying filling in the gaps.