OK, so everyone is praising Sir Alex Ferguson today, and why not. What he has achieved has been staggering. The picture above was taken at Gulliver's on Oldham Street in 1986 shortly after he'd joined Manchester United. He accepted an invitation to come along with his number two Archie Knox and talk to a Football Supporters Association public meeting - we attracted about 100 people. It shows how much football has changed in all that time.

He also did an interview for North West Business Insider when I was editor in 2009. In that piece he discussed retirement, saying it may come in three or four years, well, it's been almost four now. Here's what he told Jim Pendrill, who did the interview: 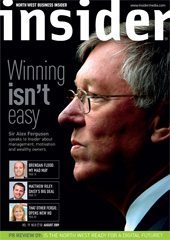 “Since I said I was going to retire and changed my mind I think people think I will be here forever,” he says. “Some days I wonder myself. It could be three or four years, other mornings you wake up and think ‘have I done enough’. Then you get to the training ground, see the lads and you know how much you love it.”
But when Ferguson does finally decide to walk away he won’t disappear overnight: “I have been on the treadmill for so long that when I come off I cannot just stop.”
He says he is comfortable with some kind of ambassadorial role at United, but adds that “you never know” what’s around the corner.
But finding the right moment to go will be tough. “I have a new team and want to see that mature, so picking the moment is difficult,” he says. “One, getting off the treadmill; two, because of how much I’m enjoying it; and the third thing, which may decide everything, is my health. So far I’m not too bad.”

Interesting too that he paid tribute to the Glazer family. That may not go down too well amongst the faithful, but as foreign owners of football clubs go, they aren't the worst are they?
Posted by Michael Taylor at 9:26 am