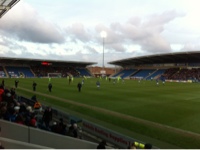 We went to Chesterfield last week to watch Adebayo Akinfenwa, Northampton's massive striker and the strongest player on FIFA13 on the Xbox, or so I'm told.

That was why the kids wanted to go. My motive was to visit a new home ground - my 76th of the current 92. Except it isn't, it was my 63rd. I've lost 11 who have new stadiums, and then there is the Wimbledon situation which I'm not sure how I count that.

Of total grounds visited it's 135.

Posted by Michael Taylor at 5:51 pm

I've not been to many this year (mainly due to Marple's newest resident being born - happy days) but I'll be off to Wigan this Saturday for the visit of my beloved Saints FC!

Still very unhappy with the club at the moment - well, one man in particular - for obvious reasons. Cortese has put us right up there in the laughing stock ranks alongside Arsenal (in general) and The Venkys.

But I'll be getting behind them from the Dave Whelan Stadium this Sat. I'm sure you've 'ticked' this one already - but if not, come along!