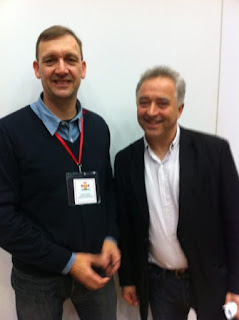 One of the great unsung heroes of modern British culture is Frank Cottrell Boyce. I bumped into him at the Hay Festival and asked him to speak at a conference I was involved in at Aquinas College.

He is a terrific speaker and responded really well to questions afterwards. He played a huge role in scripting the Olympic opening ceremony with his friend Danny Boyle, which is full of anecdotes and glory. But I just really liked his delivery. He has a warmth and generosity about him and a particularly smart way of communicating the simplicity of Christian values and faith. Just what you need for an event like this as the rhetoric can get quite heavy.

Here he is: "Even so, people are often surprised when I admit to being a practising Catholic. Not that anyone’s ever taken issue with it but there is always that moment of surprise that tells you they had an image in their head, and it wasn’t you. And because people are polite you never quite know what that image is: did they think I was going to be St. Francis – poet, environmentalist, genius – or did they think I was going to be Mel Gibson?"

Here is the full text of Frank’s talk and here is the audio recording.
Posted by Michael Taylor at 6:27 pm